HomeNews & MediaNewsProfessor Tom Troeger retiring on a song and a prayer

Professor Tom Troeger retiring on a song and a prayer

Last month, during the final moments of one of Thomas Troeger’s last YDS classes before his retirement, the 20 students in “Congregational Song as a Resource for Preaching and Worship” broke out in song in praise of God and Tom Troeger. 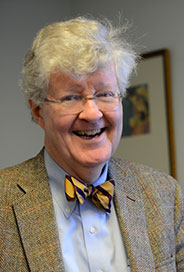 M.Div. candidate Mark Koyama and four other student poets and musicians collaborated on a hymn called “Praise God for Guides and Teachers” in homage to Troeger’s wide-ranging interests as a teacher, poet, and musician.

“I was astonished—the whole class sang it!” says Troeger B.A. ’67, the J. Edward and Ruth Cox Lantz Professor of Christian Communication, who is ending a 10-year tenure at YDS and a nearly 40-year career as a teacher of homiletics and a practitioner of the Christian imagination.

Maybe he shouldn’t have been so surprised. Colleagues and students say Troeger has brought a remarkable combination of skills and interests to the craft of preaching, the writing of hymns, the pursuit of theological clarity, and the teaching of ministers-in-training. At stake is the task of helping churches stay in touch with vitalities of conviction, joy, and beauty. (See Troeger’s essay “The Necessity of Beauty” in the Spring 2015 issue of YDS’s Reflections magazine.)

“In academic life we tend to focus on what’s wrong, what needs correction, but Tom reminds us to pay attention to the mystery and beauty of God,” says graduating S.T.M. student Victoria Larson, one of the writers of the Troeger-inspired hymn.

“And he does this in a way that’s holy and affirming.”

In a period of great change in church and culture, Troeger’s career—his books, poems, hymns, and pedagogy—reflects deep encounters with the shifting frontiers of intellectual inquiry, human rights movements, tech revolutions, and biblical theology. His output of hymns exceeds 600, covering a range of contemporary themes. He is well represented in major denominational hymnals.

“More hymns have been written since the 1960s than ever before. We’re talking in the millions,” Troeger says.

“Hymns are a way to do theology. I think hymns work that way for most people. If you ask people what they’re most likely to remember—a Bible passage, a sermon, or a hymn—which do you think it would be? Surely a hymn!”

Turbulent times provide a rich moment for producing new hymns, he says: the Reformation, the slavery era, the period of Social Gospel agitation, today’s scientific discoveries. He quotes composer Erik Routley: “Periods when somebody somewhere is tearing up the turf and asking questions and organizing rebellions and reconstructing disciplines produce hymns.”

In that spirit, Troeger has been a pioneer in stretching traditional hymn themes to include environmental issues, genetics, and big bang theory.

“I’m not a scientist, but I love science,” says Troeger, the son of an inventor. “My job is to translate between the worlds of science and faith.”

After he retires this month and moves to Maine with his wife, Merle, he hopes to catch up with the Society of Ordained Scientists, a group of clergy who take a keen interest in the sciences. They’ve used Troeger’s hymns in the past.

“I’ll be happy to go to their next convention and sit down and talk to them,” he says.

Raised in New Jersey and upstate New York, Troeger graduated from Yale College in 1967, then Colgate Rochester Divinity School in 1970. He served a Presbyterian church as a pastor before joining the Colgate Rochester faculty (1977-91) and Iliff School of Theology in Denver (1991-2005) before coming to YDS. In 1999, he was ordained in the Episcopal Church, making him dually aligned with Presbyterian and Episcopal traditions.

As a scholar and writer, Troeger has taken two broad paths: homiletics and poetry. Each enriches the other, merging in a passionate argument for the imagination of belief. He has given much attention to contemporary conditions of life and their impact on religious practice, such as our multitasking routines, the speed and condensation of information, the intensification of pluralism. His more recent work has emphasized the use of multiple intelligences in the life of faith—the engagement of logical, musical, bodily, interpersonal, verbal, and other modes of learning that people bring to their experience of church.

In their 2013 A Sermon Workbook: Exercises in the Art and Craft of Preaching, he and YDS colleague Nora Tubbs Tisdale teamed up to produce a book based on their seven years of experience of co-teaching the Divinity School’s introductory preaching class.

“Its exercises are designed to help you think like a preacher, write like a preacher, and proclaim the good news with imagination, theological integrity, deepened biblical insight, and heartfelt passion,” they write.

Nora Tisdale calls Troeger a foremost homiletician of this era, a bridge-builder between the worlds of preaching and music, an imaginative preacher, poet, flutist, and colleague.

“One of the great gifts of my life is teaching with Tom Troeger,” she says. “He has such deep respect for adult learning, the gifts and contributions that students bring. And then there are the poetry and hymns! He speaks deeply to creation theology. He shows that science and theology don’t have to be at odds. He tackles issues that few others attempt in a hymn, like domestic abuse, in thoughtful biblical and theological ways that churches need to address.”

From the start of his career, Troeger’s books have pushed beyond conventional thematic boundaries. His first, in the mid-1970s, related yoga to western prayer tradition. He has written on biblical ideas of salvation and ways to pray the Psalms, and he has produced multiple volumes of hymn texts, anthems, and poems.

But he says the synergy provided by Yale Divinity School—including his association with the Yale Institute of Sacred Music and the Berkeley Divinity School, his collaborations with Tisdale and other scholars, his preaching at Marquand Chapel—has allowed him to expand his encounter with modern challenges to church and theology.

“These years at Yale have been the best 10 years of my life. I can’t overstate it,” he says.

“YDS has given me the encouragement to write what I’ve done.”

Across four decades Troeger has seen convulsive shifts in culture, politics, and theology. Two things haven’t changed, he says—the persistence of sin and the power of grace. Whether in his books or his poetry or his preaching or his classroom, he looks to scripture for a clue to permanent truths despite the latest generational uncertainties.

“In the Bible we find tremendously different ideas about God,” he says. “The Bible didn’t just canonize the content but the process—the process of reflecting on who God is and how God relates to us. We’re not biblical if we remain static about our ideas of God.”