The Reverend Dr. Raphael Gamaliel Warnock believes that the black church and black theology are long overdue for a serious conversation with one another. 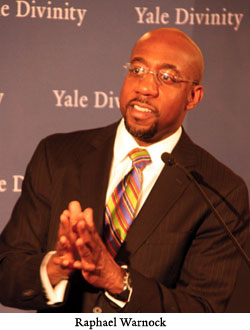 On Tuesday, February 26, Warnock delivered the 2012-13 Yale Divinity School Parks-King lecture to a group of students, faculty, staff, and community members in Marquand Chapel.  Entitled “Piety or Protest: Black Theology and the Divided Mind of the Black Church,” Warnock’s remarks drew on his experience as both senior pastor at Ebenezer Baptist Church in Atlanta, GA, and a theologian with a doctorate in systematic theology from Union Theological Seminary.

Warnock began his lecture with reference to the 2008 presidential election, when, he said, “what was for many Americans, black and white, a strange new term emerged in the national conversation: black theology.” The appearance of black theology on the national scene followed from the publicity around Reverend Jeremiah Wright, then-Senator Barak Obama’s pastor for over 20 years. Emphasizing that many of Wright’s words were taken out of context, Warnock articulated the fears and suspicions of white Americans unfamiliar with black theology. “What kind of church was this?…What was the impact of this kind of preaching and this activist black church on the worldview and politics of this man who would be president?”

Noting the fissures that the 2008 election revealed in an ostensibly post-racial America, Warnock pointed to a similar disjuncture within the black Christian community itself. “If the Jeremiah Wright debacle revealed how little most white Americans understood about the black church, it also underscored how little black people, even black church people, understood about black theology. The truth of the matter is many, perhaps most, black people, unchurched and churched, had never even heard of the term ‘black theology.’”

In a sense, Warnock said, the 2008 conversation “awkwardly reintroduced” black theology to the black church.

Despite what he sees as a “cohesive thread [of] radicalism” in the history of black Christianity, Warnock lamented the “profound disconnect” between a black theology of liberation rooted in the struggle against oppression and the often socially conservative, pietistic expression of contemporary black faith.

“[It’s a] central theological tension in African American Christianity,” explained Warnock, “the black church has had at each juncture in its history to ask itself the following theological questions: As an instrument of salvation through Jesus Christ, is the mission of the black church to save souls or to transform the social order? Or is it both?”

Ultimately, Warnock wants to see a new relationship between black theology and the black church made visible in concrete actions for liberation of all people, including efforts to end not only racism, but also gender inequality, sexism, homophobia, and ecological devastation. As such, the black church will take its place as the “conscience” of the Christian church in the United States.

“Authentic piety and true liberation are inextricably linked…the mission of the true church is to save bodies and souls,” he affirmed. Only by acknowledging and living into this truth can black Christianity “[bear] witness to the beloved community and the coming reign of God.”

Following his lecture, Warnock fielded questions from his audience, including an online submission from Gabrie’l Atchison, M.A.R. ’13. Atchison asked for elaboration on Warnock’s view of the black church and its acceptance of LGBT people of faith.

In response, Warnock acknowledged that, while black churches have generally included LGBT members, these members are often excluded from full and open participation in faith communities. He described this as an especially painful failing, because the black church “was a church born fighting for freedom. So any kind of bigotry is particularly glaring within this context.”

Atchison, whose work focuses on the commercial sexual exploitation of children, including LGTB children within that population, appreciated Warnock’s response. “I liked his answer because it was practical. He explained that Black LGBT people are not some sort of separate entity from the church - we are a vital and intergral part of the whole.”

Similarly, Patrick Burrows, M.Div. ’14, welcomed Warnock’s call for a more expansive liberationist agenda. “The courage shown by Rev. Dr. Warnock, as pastor of the historic Ebenezer Baptist Church, in calling his tradition to account for sexism and homophobia, to align himself with the deep insights of womanist thinkers, gives me hope—for the engagement of black and womanist theology and the black church, and for all called to justice-making ministry and scholarship.”

At the same time, Warnock’s concerns about the future of the black church resonated with Tyrone McGowan, M.Div. ’13.  “As a product of the African American religious tradition, I am wrestling with the same questions Warnock raised tonight. What type of church will we be? Will we stand firmly in the prophetic tradition and speak truth to power, or will we be reactionary and focus on issues of personal piety?”  Yet, McGowan ultimately drew strength from Warnock’s words. “I left the lecture encouraged about the prospect of actualizing the prophetic sensibilities of the black church in the very near future.”

>View the lecture given by Warnock online