Yale Divinity School is proud to celebrate a momentous occasion in the School’s history, a landmark event that symbolizes the vibrancy, vitality, and strength of one of the world’s leading theological schools. 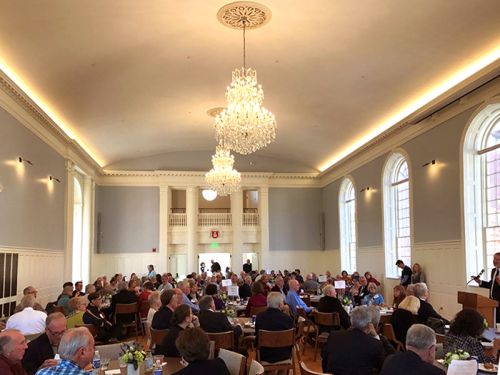 After more than 20 years of effort, the project to save and restore the Divinity School’s Quadrangle is now complete. In November, the beautifully renovated Old Refectory and Old Common Room from the School’s storied past reopened and rejoined the School’s family of buildings.

“Twenty years ago, the School was in a significant state of disrepair,” says Dean Greg Sterling. “What we’ve accomplished with the Old Refectory and Old Common Room brings us full circle. This is a signal to the world that the Divinity School is vibrant and healthy and prepared to be a leader, now and well into the future.”

The ‘Save the Quad’ movement

In the 1990s, the Divinity School was experiencing a difficult moment. Emblematic of a university-wide problem, the buildings were crumbling on the Quad. This led to decline in applications and prompted larger debates: What should be done about the YDS physical plant? What place should the Divinity School have in Yale’s future?

What followed was a years-long decision-making process, rife with protests, debates, and discontented feelings among loyal Divinity School community members. There was talk of shrinking the School, moving it downtown, and razing the quadrangle that had been its home for more than 60 years.

The School’s passionate supporters made sure none of that happened. Through activism and public persuasion, the “Save the Quad” movement made a compelling case. 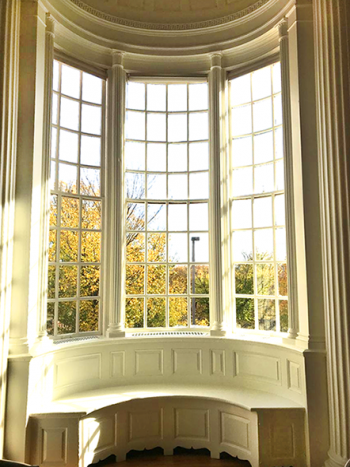 The University listened. By 1996, Yale had decided that restoration was the right path, and the Divinity School, together with the University, raised $49 million dollars to renovate the Quad—a huge victory for YDS and its future. Plans included upgrading most of the existing facilities, converting student residences to offices and classrooms, and creating a closer physical bond between YDS, Berkeley Divinity School, and the Institute of Sacred Music.

But the Divinity School’s victory was partial. The University’s plan also called for bulldozing four buildings on the eastern end of the Quad that were falling into disrepair—the School’s original squash courts, which had been converted into classrooms; a gymnasium that had become home to the ISM; and the Old Refectory and Old Common Room, where students had been eating, studying, and socializing for 50 years.

Scully (who died on November 30 at the age of 97) famously warned at a School of Architecture symposium, “If the Divinity School were rebuilt according to the present plan, I’d have to rethink my future in this institution. Loyalty can be stretched only so far.”

By the following September, the Yale administration had amended its original plan. Instead of demolishing the eastern buildings, the University opted to convert the classroom space on the old squash courts into a part of the School’s library and to “mothball” the other three, postponing a decision on their ultimate fate.

“Legend has it that this final decision for the eastern buildings came so close to the wire that the wrecking balls were already on campus and ready to be put into action when the call came to send them packing,” remembers James R. Hackney, Jr. ’79 M.A.R., the Divinity School’s senior development director. 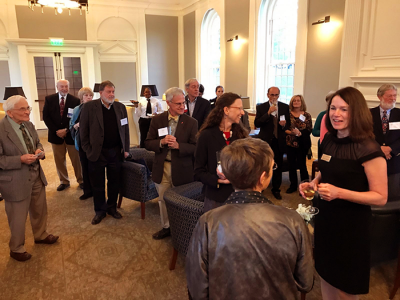 Moving into the light

Over the next decade, fruitful changes took place throughout the Divinity School. The renovation was undertaken in earnest, resulting in a restoration of the Quad’s exterior, renovation of Marquand Chapel, and, in 2007, the creation of a home for the Yale Center for Faith & Culture, as well as classroom and faculty offices, in the previously mothballed gymnasium.

Improvements went deeper than the School’s physical plant. YDS strengthened its status as one of the nation’s preeminent theological institutions. Under the leadership of then-dean Harry Attridge, the Divinity School was invigorated by exciting new professors, a diverse community of students and scholars, and a renewed spirit of intellectual inquiry and Christian faith.

Amid this flourishing, however, there remained a sense of unfinished business. The Old Refectory and Old Common Room sat empty, not belonging to the Divinity School any longer and having no real place in the life of the University, short of hosting a few special events and faculty dinners for a time until the spaces’ outdated and under-maintained appearance made them unattractive even for those occasional uses.

Then, in 2014, the Old Refectory and Old Common Room began to see some life again. Made ready by a bare-bones renovation, the spaces became the temporary homes of the Yale Philharmonia and the Yale Opera, respectively, which were ousted from their homes downtown while extensive renovations were being undertaken at the School of Music.

In January of this year, the Adams Center for Musical Arts opened, and the music school’s orchestra and opera vacated the Old Refectory and Old Common Room at YDS to move into their new homes. With these historic spaces now unoccupied and the Divinity School in a strong position, Dean Greg Sterling decided the time was right to reclaim this lost part of the School’s campus. 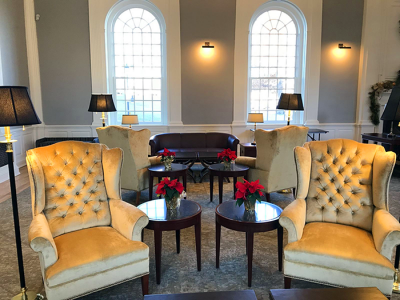 Back into the fold

Multiple factors went into Sterling’s decision to approach the University to make the case for returning the Old Refectory and Old Common Room to the Divinity School.

“With 400 students, we had needs that our existing facilities weren’t able to meet,” Sterling says. “We had functional challenges, such as the need for more large spaces for meetings, a viable banquet facility, and more classrooms and offices. We also wanted to provide the School’s community with a place where they could convene and relax, to have conversations in a place that felt warm and relaxing like your own den or living room.”

The University administration had two main concerns when it came to restoring the spaces to the Divinity School’s possession: Was it within the School’s financial capability to renovate and maintain these buildings into the future? And would the project be able to address the School’s practical needs while respecting both the historical and emotional value that alumni, students, faculty, and staff placed on these revered parts of the School’s past?

Sterling made the financial case and demonstrated that the Divinity School indeed was in financial position to restore and sustain the Old Refectory and Old Common Room. Under the capital replacement system now in place at Yale, the Divinity School is required to set aside money exclusively for ongoing renovations, which ensures that the buildings are not at risk of falling into disrepair again.

As for the second question, Sterling, the Dean’s Advisory Council, and the Alumni Board were crafting grand plans for renovating the Old Refectory and Old Common Room in ways that would meet the needs of today and the future while honoring the past.

“These two spaces were beloved by anyone who was a part of the Divinity School up into the 1990s,” Sterling says. “Students ate three meals a day together in the Old Refectory, and they made memories and lifelong friendships in the Old Common Room. We wanted to make sure that we could do them justice by making them even more beautiful than they once were, while still making them function for the needs of the Divinity School today.”

Making up for lost time

Renovations began first in the Old Refectory in late spring of 2017, catalyzed by an unrestricted bequest of $75,000 from ​the late Wendell Weir ’56 B.D. Most of that gift was devoted to the dazzling new crystal (and energy-efficient) chandeliers that now light the room.

The utmost attention was paid to making the renovations environmentally sensitive, cost-effective, and of the highest quality, to striking a balance between simplicity and elegance. Reflective of the School’s deep commitment to sustainability, the renovation team chose LED lighting for the renovated spaces, as well as ultramodern and energy-efficient HVAC systems. Contemporary wall colors were picked out, coupled with furniture made of dark wood and traditional leather. 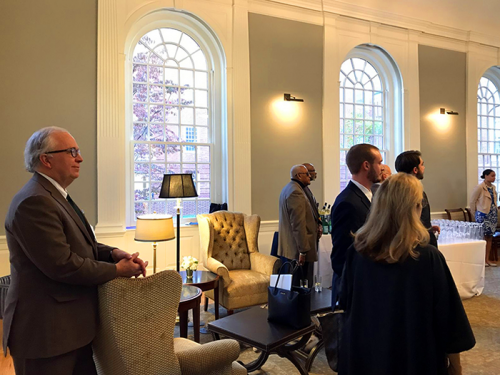 “The work displays the grace and beautiful simplicity that have been the hallmark of Yale Divinity School since it was first established,” says Christopher Sawyer ’75 M.Div., chair of the YDS Dean’s Advisory Council.

The Old Refectory will be used mainly for special events, such as the Convocation Luncheon and Alumni Awards Dinner that were held there in October. A record turnout of more than 600 alumni and friends marveled at the space’s stately appearance. On its herringbone wooden floors, the 3,062-square-foot Old Refectory can seat up to 250 for dinners, which are prepared in the connected, state-of-the-art catering kitchen, and is also wired for video presentations.

The lower level of the Old Refectory includes new office space that will soon be occupied by the Jonathan Edwards Center and Yale Indian Papers Project. Two new classrooms and new restrooms complete the bottom floor.

The Old Common Room will be a “front door” of the Divinity School, adjacent to the main entryway and connected directly to the main level of the Quad. It will be open for faculty, students, and staff to meet, relax, read, and study, as well as for the entire Yale community to help build a sense of unity between the School and the downtown campus. The Old Common Room also features a large wooden table that seats up to 16 people for private dinners that are too large to be held in the Deanery.

The project’s final stages were completed in early December, with the opening of a connecting space to the Old Common Room from the main part of the Quad and a direct entrance from the parking lot to the Old Refectory.

“What makes these buildings’ successful reopening so satisfying is that it honors all the people who have supported this school over its 200-year history,” Sawyer says. “We stand on their work. These restored buildings honor them, their past support, and the bold vision for the future that we now collectively and faithfully hold with them.”

To Dean Sterling, the renovation of the northeast buildings represents two decades of transformation that he is proud to be a part of.

“The Quad is now reunited,” Sterling says, “The restoration of YDS is complete.”

Editor’s Note: The restored northeast buildings will be officially dedicated at the beginning of next semester. Details will be announced later. 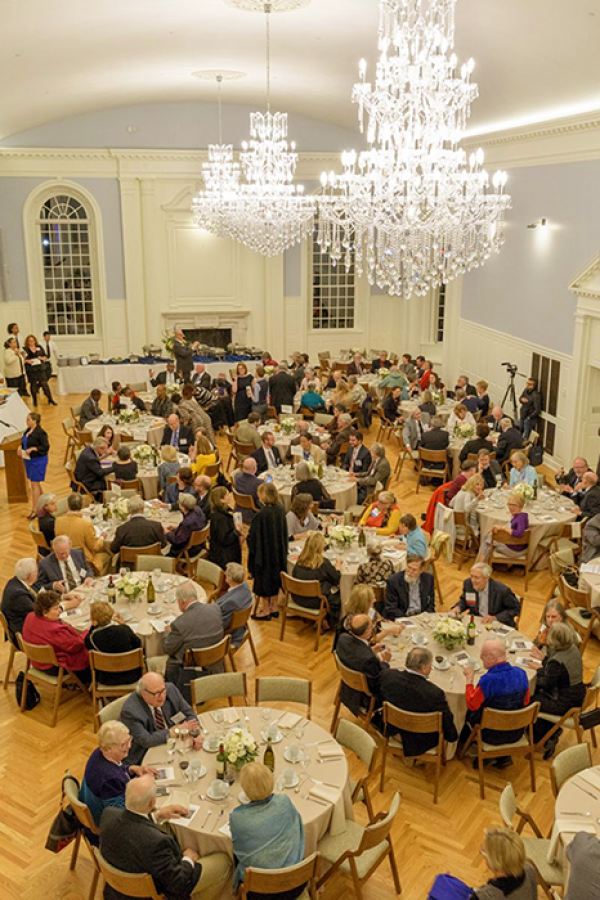