Dear Colleagues,
I am writing to let you know that Steve Crocco, Director of the Divinity School Library, has decided to retire at the end of June.
Steve came to Yale in 2015 after decades as the library director at Princeton Theological Seminary. We were thrilled to have him join us. 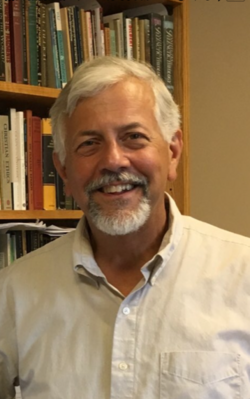 During his tenure at the YDS Library, a number of important collections have been added. First, Steve led the library in our negotiations with Andover Newton. We are deeply grateful that Andover Newton brought their Jonathan Edwards Collection (now at the Beinecke), thousands of other volumes, and a significant trove of rare and antiquarian items.
Steve helped bring a second collection of Jonathan Edwards materials to the library when Adele Shepard, a descendent of Timothy Dwight (a grandson of Jonathan Edwards and a president of Yale), donated the private collection of letters and sermons that she had inherited. It was a treasure of materials from the Edwards family and from those with whom they corresponded, including George Washington and John Adams. Steve and Ken Minkema negotiated this donation.
Finally, Steve helped negotiate the donation of a collection of early editions of Josephus, the Jewish historian, from Elinor Eisemann. This is a very impressive set of rare books in pristine condition and represents Ms. Eisemann’s lifetime of collecting.
Steve has also been exceptionally attentive to the needs of students. He created a special room for doctoral students to use. He has developed close relationships with student workers in the library and helped some go on to advanced degrees in library science.
The physical condition of the library has also changed. Steve was part of the team that worked on the renovation of the Trowbridge Reading Room, which now rivals the Day Mission Room in beauty. He has been helping with a plan to remodel the former Ministry Resource Center.
In addition to these responsibilities, Steve has served on the Leadership Team of the School and has contributed in every capacity that we have requested. We will all miss him; I certainly will.
Steve is moving back to Pittsburgh, where he has family roots. Grandchildren have become a siren call for Steve—a phenomenon that those of us with grandchildren understand—and retirement will give him the opportunity to visit them.
Please join me in thanking Steve for his service and wish him well as he enters a new phase of life.
Best wishes,
Greg Sterling
April 28, 2021