A conversation with Old Testament professor Robert Wilson might saunter across 40 years of memories at Yale, where he has taught fulltime since 1972. 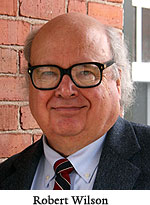 Or it might go back a bit further – to the 6th century BCE and the exilic period of Israelite history, one of his longtime research areas of interest.

In that same conversation, Wilson will see ways to link that distant era to this one, finding human connections between ancient religious tradition and the world students face today.

“Religious tradition canonized the biblical text but it didn’t canonize an interpretation of the text,” says Wilson, Hoober Professor of Religious Studies and Professor of Old Testament.

“That’s the job of each generation, which has to write its own interpretations. It’s going to be yours; it can’t be anyone else’s. That’s the human condition. It’s also the exilic problem: How did I get where I am? How do I deal with tradition, with what has happened in the past? You have to figure out where you are and how you got there. It’s what being a fully involved adult means.”

Wilson and Yale have a long history together. It almost didn’t happen. He grew up in Louisville as a Disciples of Christ churchgoer and went to Transylvania University in Kentucky. His plan was to continue on a Disciples of Christ track, attend Lexington Theological Seminary, and become a parish minister. But a teacher at Transylvania, a YDS graduate, suggested he consider graduate school in New Haven instead.

“I was headed for parish work in college, but I always had an interest in archeology,” he recalls. “I took an Old Testament course in college taught by YDS grad Glen Rose, and he made me decide to come here.”

And Wilson did, soon falling under the spell, as he says, of famed Old Testament professor Brevard Childs (who taught at YDS from 1958-1999) and making a new discovery, a fascination with ancient Near East texts. Wilson’s Yale academic career was launched.

“Archeology has to be done by going to Israel in the hot summer; working in the cool of the library looked better,” he deadpans.

His research habits yielded far-ranging dividends. He has produced numerous publications – including the books Genealogy and History in the Biblical World (Yale University Press, 1977), Prophecy and Society in Ancient Israel (Fortress Press, 1980) and Sociological Approaches to the Old Testament (Fortress Press, 1984) – and has been active in leadership positions in the Society of Biblical Literature.

His interest in parish ministry continued during his YDS student days. As a grad student, he became ordained in the Disciples of Christ and for a time was a minister at a United Church of Christ congregation in Stratford. That experience retains relevance, helping shape a pastoral regard for his students across the decades. He can still apply lessons of his parish days when comparing the preoccupations of the present-day seminarians with those in the 1960s.

“When I arrived here the big issue was civil rights and desegregation, with the Vietnam war appearing as a cloud on the horizon that eventually took over,” he recalls.

“Today, the social issues and political causes among students are more heterogeneous. They are interested in a great variety of things. The danger, then and now, is always that the issues you happen to be interested in at the moment are not necessarily the issues facing the local church. At Stratford they didn’t have much interest in civil rights movement by the time I got there; the major legislation had been passed. They were a family-oriented congregation with their own preoccupations.”

Soon Vietnam presented a different challenge. Wilson’s position was anti-war, but it was more complicated at the Stratford church, because so many people in Connecticut made (and still make) their living by military contracts.

“We had some difficulty talking about Vietnam,” he says.

“That’s what divinity students need to keep in mind – the need to prepare for circumstances and issues, if you find yourself in a permanent placement, that might be very different from your own.”

The esteem and fondness that Wilson inspires among colleagues and students can be measured by the 2009 publication of a festschrift in his honor, a book offering articles that touch on some of his themes as a scholar of Hebrew Bible, including Israelite prophecy, Deuteronomistic history, and sociological aspects of Old Testament religion. Thus Says the LORD: Essays on the Former and Latter Prophets in Honor of Robert R. Wilson (Bloomsbury T&T Clark, 2009) edited by former students Stephen L. Cook ‘87 M.Div., ‘89 M.A., ‘90 M.Phil., ‘92 Ph.D. and John J. Ahn ‘99 S.T.M., ‘06 Ph.D., includes essays by two YDS professors, “The Beginning of the End of the World in the Hebrew Bible” by John Collins and “(Re)inscribing Power through Torah Teaching: Rhetorical Pedagogy in the Servant Songs” by Carolyn Sharp.

The book also includes testimonials to Wilson’s role as a valued counselor to the Divinity School during periods of turbulence and change, his university service (including two stints as chairman of Yale’s Department of Religious Studies), his wit, his classroom mannerisms – also his proficiency as an orchestral timpani player. (Wilson has played timpani since junior high, taught it in college, was principal timpani in the University of Kentucky Orchestra for a year, and has played in various Connecticut orchestras. He became principal timpani in the Civic Orchestra of New Haven in 1975, and still holds that position.)

Summarizing Wilson’s YDS presence after four decades, Ahn and Cook write in their introduction: “Undergrads have remarked how ‘cool’ and ‘fascinating’ he makes (Old Testament). Divinity School students see Dr. Wilson as simply brilliant. His graduate students literally follow his every word. As for his colleagues, they see him as a cornerstone of the institution.”