Informally known as the Divinity School’s resident theater director, Phoenix Gonzalez ’21 M.A.R. was mere weeks away from opening night for her new production, a student performance of the Lucas Hnath play The Christians, when COVID-19 hit. A true thespian, Gonzalez knew the show must go on. She and her cast decided to stage the performance over Zoom.

The result was an engaging “online play experiment,” as Gonzalez calls it, that brought together more than 100 members of the scattered YDS community for a shared experience on April 14.

In the following interview, Gonzalez talks about the experience and, more generally, her work at the intersection of theater and religion. 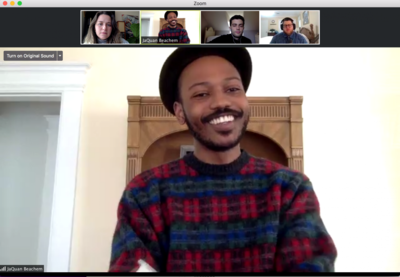 What inspired you to direct The Christians and the online reading experiment?

Last year I directed the Play of Noah, a modern retelling of the story of Noah in the context of the current environmental crisis. After that experience the Associate Dean for Student Affairs, Jeanne Peloso, asked if I’d be willing to direct another play the following year. I said yes and began gathering my team of people.

For a while we had trouble choosing a play. Our Divinity Drama group had done a reading of Lucas Hnath’s The Christians last spring, so that was bouncing around the back of my brain as an option. But one morning I woke up and had that sense of clarity you sometimes get when facing a stressful decision. The fog cleared, and it became immediately evident that The Christians was the right choice. We started rehearsing, we set a date, we got the rights, it was all going to happen, and then COVID-19 hit.

We were questioning whether we should cancel, but that didn’t feel right. Once the dust settled and everyone was safely where they needed to be, we took stock and said, “OK, we’ve got a cast that’s spread across the U.S., we’ve got basically no funding, but we have a lot of rehearsals under our belts, we have licenses to Zoom, and we’ve got a dream to put on this play.” We ended up turning it into a low-key, free-to-the-community dramatized reading of the script over Zoom. 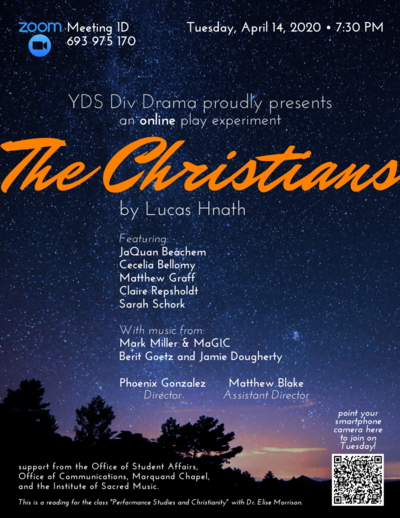 Tell us about the play’s transition to Zoom and the challenges of working with a digital platform.

I worked in New York as a tech product manager for several years. That experience allowed me to say yes to this online play experiment. I knew technology was not the enemy. Technology is a tool, and I didn’t see why we couldn’t try to host a theatrical, community-building experience via this technological platform.

There were definitely a lot of challenges in switching The Christians over to Zoom, and many of them were psychological. We had prepared and rehearsed this play in a certain way for so long, and we were looking forward to spring break. But not only were we denied spring break as we dealt with the oncoming pandemic, but we also realized we would have to rethink and restage this play entirely. There were some cast members who weren’t sure if they were on board with the transition to Zoom. Ultimately, we decided to pull back in terms of rehearsal, and I think taking some of that pressure off was one of the most liberating parts of the experiment.

What was your process in directing this show?

My directing process is informed by the fact that I have so much theater training in how to make a moment truthful, so there was a lot of soul searching that went into the rehearsals. There’s a visceral feeling you get when you act and connect to something true. The feeling is deep in your belly, and it feels a little dangerous. It’s a raw place you can tap into, and some of the most exciting stuff of theater comes from that truth-telling place. As a team, we worked a lot on connecting to that truth-telling center. It’s very vulnerable, but it can lead to some real growth when you’re able to go there with a community of people. In directing this, I knew The Christians was a play about a church community, which is very similar to YDS by virtue of the fact that we’re all gathered together in this one place. We make up a church community of a sort. I felt strongly that the words of this play’s church community should be inhabited by our seminarians. 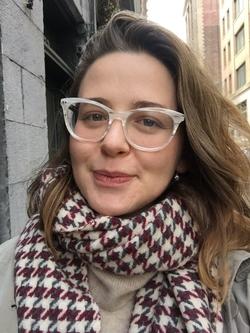 My directing projects are also highly collaborative, and I was very invested in having different voices participate in the creation of this project. For example, we asked if the Marquand Gospel and Inspirational Choir would be willing to learn the music for this play and perform it over Zoom. Thankfully they were. I also talked with Berit Goetz ’20 M.A.R., who has been a fixture in the YDS community as a musician, to sing in the play as the praise leader—which she did!

There were a lot of people who contributed out of goodwill and a desire to be in community. In all cases they were kind, loving, giving individuals who were willing to participate in the project.

Tell us a little bit about your theater background.

My interest in theater was originally fostered in my Roman Catholic church where I grew up in Miami. There was a music director there who put on several musicals at the church, and she took me under her wing. Eventually I went to a performing arts high school for musical theater.

When it came time to go to college, I was nurturing a deep appreciation for history and academics, so I went to Princeton University. I ended up majoring in religion but minored in theater and medieval studies. I took a directing class at Princeton, and it was really transformative for me. I am still a performer and I love performing, but directing allows me to bring all my gifts into the room, and to help people grow into their roles.

How has your interest in theater informed your studies at YDS?

My concentration is liturgical studies, and I refer to it as the performance studies of the church. Liturgy has history and texts you can study, but it also has the text in performance. Today we think of church and theater communities as being separate, but I like to explore those perceived differences by appreciating the similarities between the two. I’m interested in exploring how we can bridge the secular theater community with communities of faith today.