Studying the theology ‘hidden in open view’: An interview with Prof. Chloë Starr

Chloë Starr’s current research project, a book on the life of Christ in Chinese fiction, charts the multi-faceted ways Chinese novelists from the past century have examined Jesus’ life and meaning.

“The Christian God,” Starr says, “is hidden in open view in Chinese literature.” 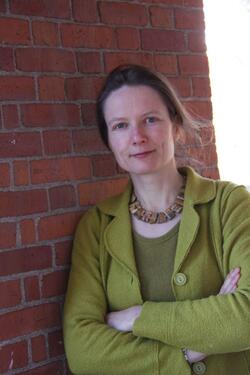 Newly promoted to full Professor of Asian Christianity and Theology at YDS, Starr is engaging in the delicate process of eliciting theology from literary threads—some quietly (and some not so quietly) revolutionary—from the past century of Christianity in China.

Starr is exploring 12 twentieth-century works of Chinese literature, linking each to thematic and narrative points in the life of Jesus, who appears, in various pieces, by name or by analogy.

“In Chinese literary historiography, the existence of Christianity has been systematically occluded,” she says. “There’s a reclamation move here, and a recovery—retrieving the Christian voices.”

Revolution. In English, the word in its original meaning refers to a rolling back or revolving, as with celestial bodies. In Chinese, “gé mìng” (“revolution”) comprises characters for “to remove from office” and “fate,” or “to change in accordance with the Mandate of Heaven.”

Communal and national salvation are primary themes in modern Chinese Christian fiction. In The Revolutionary Carpenter by Zhang Shizhang, a novel included in Starr’s project, the main character is a radical Jesus who liberates through equitable economics, a Jesus of Social Gospel salvation. Links between Christianity and Marxism are common in the Chinese canon.

Reflective of the changes China has undergone, Starr’s forthcoming book A Life of Christ in Chinese Fiction will be the first twenty-first century English-language study of Chinese Christian literature. Starr notes that before Republican Era in the early twentieth century, a biography of Jesus could not have been written. Literary conventions in late imperial China sanctioned a list of biographical subjects “with appropriate credentials,” Starr says; Jesus didn’t make the cut.

Other literature in Starr’s book project include “Revenge II,” a prose poem by one of China’s most revered authors, Lu Xun. The work is a chilling, visceral depiction of a Crucifixion in dark psychological tones. Also included is Bei Cun’s The Baptizing River, the author’s first novel as an openly Christian author. “He was an author before he was a Christian, which I find makes for a better type of writer,” Starr says. The novel follows a character through an un-Christ-like life of crime to an encounter with a redemptive river.

A personal and intellectual home

Starr has honed her work over the years toward these kinds of refracting lenses of Jesus. After childhood and secondary school in the United Kingdom, she spent a gap year teaching English in Beijing, where she began to learn Chinese. She conducted her first research in China after her doctorate on Sino-Christian theology, and she travels often to a country she considers both a personal and intellectual home. Each summer she returns to teach Chinese and Japanese Christian literature courses at Renmin University Summer Institute in Beijing.

The last two years, however, have been keenly different. It has been over a year since Starr visited China, due to COVID-19 restrictions. And when she was last in Beijing, in the summer of 2019, there was mounting tension in China’s “one country, two systems” territory, Hong Kong.

Twelve hundred miles south of Beijing, youth and students protested on the streets of Hong Kong, seeking to protect and expand rights and autonomy in the face of political encroachment. The massive, year-long protest had enormous public support in Hong Kong, but the events precipitated an even more forcible tightening of restrictions from the People’s Republic of China. Arrest warrants were issued for leaders of the protests, and some have left the country for asylum.

After three weeks of teaching, Starr traveled throughout the country, giving lectures at Nanjing University, attending a conference in Macau, and informally visiting church contacts. Reactions to the protests in Hong Kong were striking, Starr says. In her address at the Divinity School’s Opening Convocation this past August, she remarked:

“What was really noticeable last year was the comprehension gap between even well-educated and well-placed Chinese and Hong Kong citizens. Most mainlanders I spoke to, Christians included, were quick to condemn the predominantly peaceful Hong Kong protests as chaotic, lawless, or misguided.”

In the U.S. this past summer, protestors likewise took to the streets to call for change in the face of repeated police violence against Black citizens. Quieter revolutions are underway in academic institutions, calling for substantial diversification and decolonization of curricula. There are still tremendous gaps in Asian theology studies in American universities, divinity schools, and seminaries—gaps that are slowly filling.

“The revolution is happening, but it’s happening slowly. And it’s patchy,” Starr says.

The move towards inclusiveness is, of course, a global movement. “Given the demographic shift and given the ecclesiastical shift—towards sub-Saharan Africa, Korea, and Latin America, for example—we need to expand the focus of our attention and include much more thinking and writing from people outside ‘the tradition,’” Starr maintains. 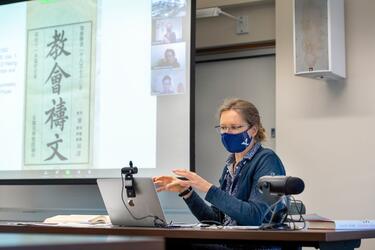 Christianity’s presence in China has a roller-coaster history. Confucianism and Daoism were thousand-year-old theological presences, and Buddhism had been on the ground for 600 years, by the time Christianity was introduced in the seventh century C.E. The faith flourished and withered several times over the centuries that followed. It took root when Jesuit missionaries came to China in the sixteenth century.

Today, Chinese Christianity is growing at a rate that far outpaces Western nations. By various estimates there are now between 67 and 100 million Christians in China. But the religion has undergone contemporary periods of repression, most recently the Cultural Revolution (1966-1976). In that time, Chinese Christians often had to celebrate underground—sometimes literally in caves—or house churches. It was after this time period, in the Reform era, that Christianity experienced explosive growth in China.

Across multiple periods of social and political upheaval in twentieth-century China, a wealth of literary material has developed that deserves careful exploration, Starr says. But there are ongoing challenges in researching Chinese theology. One is simply where to study it. The situation is slowly improving, Starr says, but she remembers “when I was looking for a Ph.D. program there were no options. There was nowhere outside of Hong Kong you could find to go and study Chinese theology.”

Another challenge in the West is the availability of texts. “Part of the problem in teaching Chinese theology is the absence of texts in languages which people can read,” Starr says.

In China itself, universities do not teach theology. “The system is even more polarized than the U.S. There is no YDS equivalent,” Starr says. “You are studying in a denominational institution if you are studying theology.” Religious practices are monitored, although universities are generally autonomous.

It has been difficult to find systematic overview texts in the field of Chinese theology—so Starr wrote one. Her 2016 work, Chinese Theology: Text and Context, gives an eagle’s eye view of Chinese theological developments in the last century. In the book, Starr argues that you cannot read Chinese theology without understanding Chinese forms of literature. For her new book, she states that, likewise, you cannot understand Chinese literature and its reflections on Christ without some understanding of the theological foundations of China.

‘A Star in the East’: Listen to Chloë Starr’s interview on the Marginalia podcast

One of the most fascinating areas of study in Chinese theology is the issue of foundational texts. Chinese Christian scholars such as Archie Lee have developed ways of reading the Bible “cross-textually,” bringing Chinese religious, cultural, and political texts into the process of understanding the Bible. Starr notes that the Chinese philosophical tradition provided an alternative basis for arguing about metaphysics. Medieval theologians’ texts that were translated into Chinese draw heavily on Greek Aristotelian sources for their philosophical ethos, even down to concepts like celestial astronomy and of the number of orbs in the heavens. 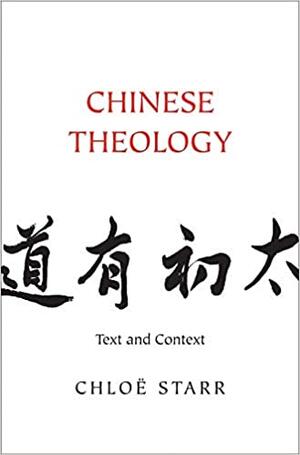 “Because the Chinese never came from that same basis,” Starr says, “they were already arguing with the Jesuits in the sixteenth century—and they were usually right!” Anti-Christians enjoyed an advantage as they debated with European Christians over foundational matters such as original sin and the science of creation. Starr notes that “they were taught of a five-and-a-half-thousand-year creation by the Jesuits at this point—well, Chinese history was already a lot longer than that!”

Jesuits adapted Chinese forms for their evangelical materials. Many of the Ming Dynasty Christian writings from Jesuits in the late sixteenth century are forms of conversations. “There is an implied oral performance in them,” Starr says, and a back-and-forth characteristic of Confucian dialogues. One theological goldmine is a collection of early seventeenth-century journals of conversations between Jesuit missionaries and visiting scholars, scientists, cartographers.

However informal or alternative they might appear by Western standards, “these are theological writings,” Starr notes. To grasp the text and context in China, “you need to rethink your definitions and the parameters of theology,” she says—a habit of mind that carries over to understanding one’s own thinking, too.

Because the U.S. is so large and dominant, Starr notes, American students are prone to forgetting something crucial about the study of theology: the fact that all theologies—very much including their own—are influenced by culture.

For a powerful example of cultural differences, Starr points to varying cultures’ responses to COVID-19. The Western world’s response has been influenced by Protestantism and its emphasis on individualisms and rights, she says, “like the right to wear a mask or not wear a mask. In the countries that have done much better with COVID-19, there is total lack of understanding about how anyone could put an individual above the group.”

“Different cultures obviously bring different things to Christ. Only by seeing others can we relativize our own theology,” she says, “and understand that ours is relative.”

Clare Byrne is a choreographer, singer-songwriter, and first-year M.A.R. in Religion and Music. Her work explores intersections of dance, word, music, and the sacred.