Two alums strive to change the narrative about faith and choice

The pro-choice movement has deep historical roots in the work of faith communities. For example, the Clergy Consultation Service, founded in 1967, comprised 19 interfaith Christian ministers and two rabbis who helped people make decisions about their unintended pregnancies and provided access to safe abortions if desired.

Following in the footsteps of these and other faith leaders at the forefront of abortion care advocacy, the Rev. Katey Zeh ‘08 M.Div., CEO of the Religious Coalition for Reproductive Choice (RCRC), and Jamie Manson ’02 M.Div., President of Catholics for Choice, see their work as theologically grounded in the gospel and the ethical teachings of the church.

“The anti-choice movement has always claimed a religious identity,” Manson says, “and for that reason, it’s essential that pro-choice religious voices are centered [in conversations about abortion].” 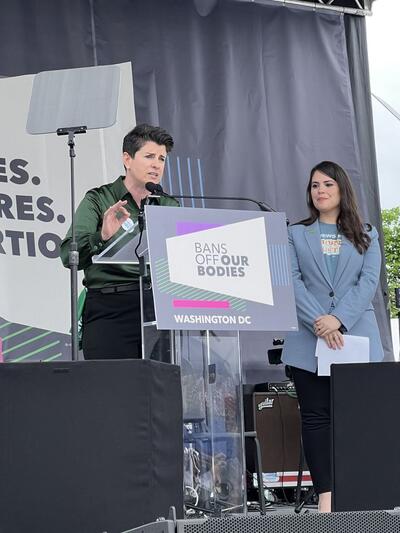 Pro-choice religious voices have often been left out of the conversation about reproductive rights, Manson says. On one hand, many religious leaders silence and stigmatize those who have had abortions, although many Catholics who have had abortions or support access to abortion continue to participate in church life: 68% of Catholics opposed the overturning of Roe v. Wade and one in four abortion patients are Catholic. On the other hand, secular organizations often do not recognize the critical roles that people of faith have played in the movement.

The contending forces of Manson’s love for and conflict with the Catholic church that led to her current vocation began early. As a child, she watched as her mother was denied communion because she was divorced and couldn’t afford an annulment. Six years later, after a moving experience with a Holy Thursday liturgy, Manson says, she felt “absolutely convinced” that God was calling her to be a priest. Soon after, though, she discovered the Catholic Church did not allow woman priests.

She eventually enrolled at YDS hoping to learn more about Protestantism and the potential to convert because she had heard Protestants ordained women. She quickly realized, however, that she didn’t resonate with how Protestants understood God and began to doubt whether she had a gift for theology. She voiced her frustrations to Margaret Farley, Gilbert L. Stark Professor Emerita of Christian Ethics, who insisted that Manson stay at YDS, saying that her struggles didn’t mean that she wasn’t gifted at theology. Instead, Farley explained, Manson was just a Catholic with a sacramental view of the world, the belief that creation is good and that everything within it can provide a conduit for God’s presence and grace.

“That notion of a sacramental view of the world became the hallmark of everything I’ve ever done,” Manson says. “My work from that day forward involved helping Catholics understand why they wanted to stay Catholic, even though the church is such a place of harm for so many people.”

After graduating from YDS, Manson served as the School’s Director of Publications until 2006, during which time she resurrected Reflections magazine. Manson’s work continues to tie into Catholic teachings about the primacy of conscience and the notion of respecting religious freedom, which was developed during Vatican II.

Access to abortion care also draws heavily on the Catholic social justice framework, intersecting with environmental care, economic justice, workers’ rights, immigration policy, and other issues related to creating conditions favorable to having children. It also ties into Catholic teachings about the primacy of conscience as the final arbiter on all decision-making, according to Manson.

“Thomas Aquinas said that to not follow your individual conscience is to offend your own human dignity,” Manson says. “This idea goes all the way back to St. Augustine and to the Catholic understanding that God created us with reason to be able to make decisions.”

Zeh’s arrival to faith was quite different from Manson’s.

Zeh grew up in a small town in Southern Georgia and was not raised in any faith tradition. When her grandmother became terminally ill and wanted to go back to church, Zeh tagged along, and church became a way of staying connected to her grandmother. The only Christian tradition available to her was conservative evangelical Protestantism, and while many of the tradition’s beliefs made sense to her; others, especially those about gender essentialism, never quite felt right.

During college, Zeh simultaneously fell in love with theology and realized that many evangelical teachings didn’t align with her evolving faith.

“I was deconstructing and finding a different way to be a faithful person and not have to subscribe to that really narrow view of what it meant to be a follower of Jesus,” says Zeh, now a Baptist minister.

Driven by her love for theology, Zeh enrolled at YDS. During divinity school, she sought to develop practical skills outside the classroom, which led her to an RCRC training on pastoral care for reproductive loss and decision-making. Afterward, she decided to volunteer at a local Planned Parenthood, where she discovered her ministerial call to care for people navigating difficult decisions about their pregnancies, a journey she details in a recent book, A Complicated Choice: Making Space for Grief and Healing in the Pro-Choice Movement.

There’s one story that tells Zeh everything  she needs to know about the approach Jesus would take: the story of the hemorrhaging woman in Luke 8. The woman has seen doctors who have taken her money and only made her problem worse, and she resorts to seeking healing outside the bounds of what was socially acceptable. She approaches Jesus in the crowd, believing that if she touches the hem of his garment, she will be healed. 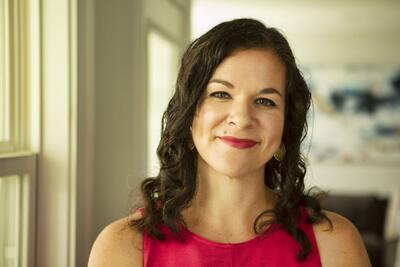 After her encounter with Jesus, the woman decides to tell her story to her community—a community Zeh imagines might include other people who had been ostracized, as well as some of the doctors who made her condition worse, or those who had marginalized her.

“Healing happens for her and for the community through her truth-telling,” Zeh says. “When people ask me how I justify what I do biblically, this story tells us everything that we need to know. This woman knew within herself what she needed to be healed. It didn’t matter that it was outside of what was allowed by the laws of the day.”

Both Zeh and Manson believe that those working as faith-based reproductive health justice activists are uniquely situated to change the narrative around abortion and faith. While secular organizations do important work, they often fail to make space for people who find abortion to be a morally complex issue.

“Our work is not only to embolden pro-choice Catholics who are already with us, but to create a space without judgment for education, encounter, and dialogue for people who don’t know how they feel and don’t find they are fitting in either camp,” Manson says.

Zeh and Manson had been preparing for the overturning of Roe v. Wade for a long time. Even when Roe v. Wade stood, the court ruling did not sufficiently ensure that everyone was able to access the abortion care that they needed.

In some ways, Zeh says, their work remains the same—although, as Manson points out, nothing could have prepared them for the emotional toll that the decision has taken on people, particularly on their organizations’ young adult staff. Zeh and Manson find themselves challenged as they seek to provide both hope and space for lamentation for people at the same time.

Both the RCRC and Catholics for Choice have initiated several new projects aimed at providing resources for those seeking abortion care. Alongside the organization’s Mississippi partner, Faith in Women, RCRC created a site called “Abortions Welcome,” a spiritual accompaniment site that provides resources from different faith traditions for before, during, and after abortion care.

“We wanted people to have a place they could come and feel held and safe, even if they’re physically by themselves,” Zeh says. “We also wanted to make sure that the site included legal, medical, and practical support resources.”

Manson led the development of the Advocate’s Bible: A Guide for Pro-Choice Catholics and Co-Conspirators, a 160-page resource that spans a wide range of subjects, from how the human reproductive system works to white supremacist roots in the anti-choice movement and the complexities of Catholic teachings on abortion. Manson and Zeh are also working to reboot the Clergy Consultation Service.

“Every single person that I’ve interfaced with who has made this decision knew deep down what they needed to do without anyone else talking to them about it,” Zeh says. “My responsibility as a pastor is not to understand why someone decides to end a pregnancy. It is to accompany them like Jesus did in his healing ministry. He centered the person. He said, ‘What do you need?’ And he gave it to them. That’s really all I need to know.”

Leah Silvieus ‘21 M.A.R. is a poet and writer working at the intersection of religion and literature. She is author of the poetry collection Arabilis (Sundress Publications) and is the co-editor with Lee Herrick of the anthology The World I Leave You: Asian American Poets on Faith and Spirit (Orison Books).