“Asylum seekers dropped off at Greyhound station. Can you come and help us?”

I received this text in the early evening Oct. 30, 2018, a year after I joined the San Diego Rapid Response Network. The SDRRN was created in 2017 by San Diego houses of faith, the San Diego Organizing Project, and the ACLU to provide support for family members when a community member is being detained or threatened with deportation. I had become accustomed to receiving texts about deportations. I was not used to calls to help people who were being admitted into the United States. 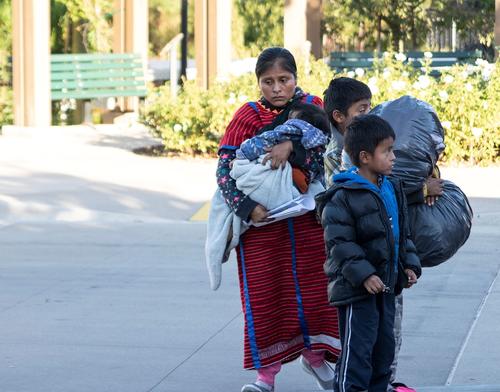 Immigrations and Customs Enforcement and Customers and Border Protection admit asylum seekers into San Diego every day, detaining them for a while before giving them paperwork to apply for asylum and releasing them. This past fall, CBP started releasing 40 to 100 young family members from detention daily and dropping them off at Greyhound bus stations in San Diego. These migrants had no food, little money, and only the clothes they could carry in a small backpack. A security guard at the Greyhound bus station called the SDRRN to ask for help.

When I showed up that first chilly night, I saw worried, exhausted young adults slumped in the 14 broken plastic chairs at the outdoor bus station. They had electronic tracking bracelets around their ankles and federal documents telling them to appear in court. Young children clung to them or milled around the vending machine. They had been in detention for 20 days, and CBP had released them because federal law forbids children from being detained longer than that. We helped the parents to call family members in the United States who would then buy them a bus ticket online. When we could get through, we helped them call family members in Honduras or Guatemala to tell them they were safe. 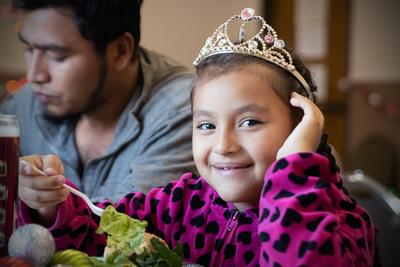 Still, some people could not get a bus to their destination that night, so we encouraged them to spend the night at the albergue—a hastily created shelter at a small Catholic church. Most migrants know of the danger of human traffickers, so some families were suspicious and said they would prefer to stay at the bus station overnight. One young mother cradled a baby and was distressed because she was out of diapers. I ran to a nearby convenience store to buy pañales, wipes, and snacks for families staying at the bus station. When some families lined up to get on a bus to Arizona, I blessed them in Spanish and prayed for their protection. They nodded, looking surprised at the offer of prayers.

Back at the makeshift shelter in a Quonset hut parish hall, volunteers huddled to figure out what to do. These families needed food, medical attention, showers, assistance at the airport or bus station, and clean clothes. The next night, I was given shower duty, which meant I escorted young families to a small house next to the church where they took turns in the one bathroom. I chatted with the waiting families and discovered that most were fleeing violence: the kidnapping of children, death threats after a family member had been murdered, and other types of gang violence in their countries.

The children were eager to practice their school English with me. “How you say ‘ciento’?” one boy asked me. “One hundred,” I said. He smiled and shook his head in disbelief at the strange-sounding word. His mother stared at me as I scrolled through text messages on my cell phone. “50 more people left at bus station in San Ysidro. Can someone meet them? That’s 100 tonight!” How you say ciento? Where were we going to put ciento people? 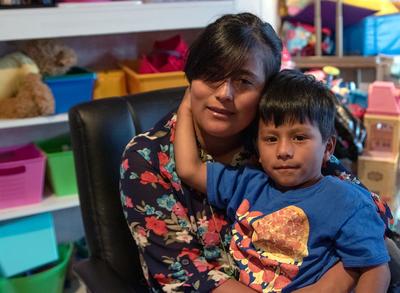 Most of these asylum seekers were on their way to family and friends and needed a place to stay for a night or two. After that, most would be going on bus trips of three or four days to their destination. We quickly realized that they would need travel food, some cash, and warm clothing for colder destinations. We created transit bags with simple snacks, water, juice, and simple toiletries. We assumed that this release of people into downtown San Diego was a temporary policy and surely would not continue.

And yet it has continued. At first, 50 to 100 people per day were dropped off in remote locations, leaving volunteers to race around town in vans looking for people. It was chaotic as we scrambled to meet urgent medical and clothing needs. Within two weeks, Jewish Family Service and the San Diego Rapid Response Network collaborated to create a full-service shelter with intake, legal aid, travel assistance, medical screening, showers, meals, and a huge clothes closet. Eventually, ICE and CBP started driving asylum seekers directly to our shelter.

The only problem was that downtown churches were too small and too inadequate to shelter so many people. For a brief time, we used a Salvation Army site, and then we moved to another undisclosed church site that still wasn’t big enough. We requested help from the federal, state, and city governments, but none of them would open a shelter in San Diego.

Because the shelters were jam-packed with migrants with no room for anything else, I was asked if my church, Good Samaritan Episcopal Church in San Diego, would serve as a central location for clothing and food donations. Since November, our neat church office and multipurpose parish hall have turned into storage rooms for huge bags of clothes, boxes of diapers, piles of snack foods, and old backpacks. The donations arrive throughout the day, every day. Each week, we sort through it all and deliver whatever is needed to the shelter; other local charities receive donations that are not suitable for the asylum seekers. 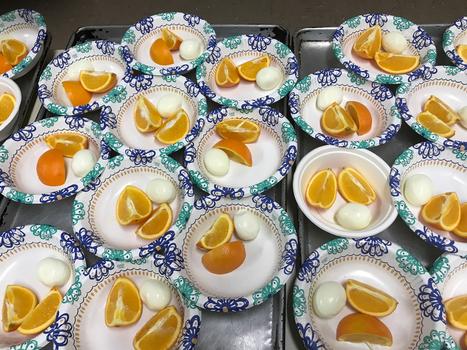 We got the word out via social media and emails, and my church soon was receiving money donations as well from San Diegans and from concerned people all over the country—almost $30,000 now. When the shelter has a dire need, teams of shoppers go out and buy as much as we can with donated money. We also use the money to dispense travel cash to families and to buy phone cards so they can call family members.

Up until recently, this interfaith effort has had very little governmental assistance except for a grant from the California Department of Social Services. Fortunately, we finally prevailed upon the San Diego County Board of Supervisors to open a county-run shelter with better facilities. On Jan. 29, 2019, the supervisors approved a proposal to use a former courthouse as a temporary shelter for asylum seekers. I cannot think of a more appropriate refugio for these exhausted asylum seekers as they seek legal admittance and protection from U.S. courts.

One sunny afternoon last month, I pulled into the shelter parking lot in my priest collar to drop off some clothing purchases and travel cash. A Jewish Family Service director gave me a receipt, and I chatted with Southern Baptist Convention volunteers from Arizona and a Catholic priest heading to the airport with some guests. This interfaith team has offered a warm welcome, refuge and assistance to more than 6,500 asylum seekers so far.  And it has done more: it has offered hope and opportunity to people who want to put the Gospel to work but sometimes feel overwhelmed by the seeming enormity of the task.

Sometimes, it’s as easy as sorting a bag of clothes. 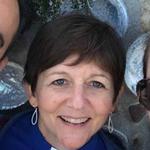 The Rev. Janine Schenone ‘12 M.Div. has previously served as Theologian in Residence at Christ Church Bronxville and Senior Associate for Congregational Development at All Saints Pasadena, where she was also active in Latino ministry. She has a Master’s in English and Creative Writing from the University of California at Davis and has taught English and creative writing at American River College in Sacramento, Calif.