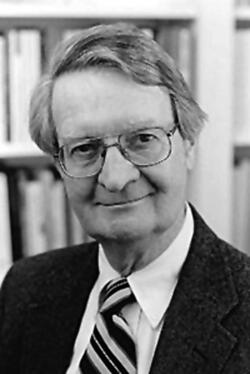 I write with a heavy heart to inform you of the death of Wayne A. Meeks, Woolsey Professor Emeritus of Religious Studies and a towering figure in New Testament and Early Christian Studies who was a dear friend of the Divinity School for many years.

Wayne Meeks had an impact on the study of early Christianity that is hard to exaggerate. His book The First Urban Christians: The Social World of the Apostle Paul (Yale, 1983) was that rare book that every scholar and student in the field had to read. It won awards including the American Academy of Religion Award for Excellence and Biblical Archaeology Review Award for Best Book on the New Testament. With this book and in partnership with Abraham Malherbe, a member of our faculty, Wayne put the social history of early Christianity on the map for New Testament studies globally. The two trained a group of exceptionally talented students who have had notable careers of their own.

A 1953 University of Alabama graduate—in physics—Wayne earned a B.D. from Austin Presbyterian Theological Seminary before coming to Yale for his Ph.D., which he completed in 1964. After teaching at Dartmouth College and Indiana University for several years, he joined the Yale faculty as Associate Professor in 1969, becoming full Professor in 1973 and earning the rank of Woolsey Professor in 1984. During his time on the faculty, Wayne served as Chair of his department for four years, Acting Chair for two, and Director of the Division of the Humanities for four. He retired in 1999.

Wayne was a world-class scholar. In addition to The First Urban Christians, he authored six books: Christ is the Question (2006); In Search of the Early Christians (2002); The Origins of Christian Morality: The First Two Centuries (1993);  The Moral World of the First Christians (1986); The Prophet-King: Moses Traditions and the Johannine Christology (1967); and Go From Your Father’s House: A College Student’s Introduction to the Christian Faith (1964). He was editor of eight more books and published nearly 50 scholarly articles. It was in his capacity as a scholar that I first became acquainted with him and came to appreciate him not only as a leading figure in the field, but as a human being. He was always willing to engage in a conversation, even when I was a young scholar and he was a major figure. I will always remember his kindness.

Wayne’s contributions were widely recognized. Perhaps most notable is that he was a member of the American Academy of Arts & Sciences and a Corresponding Fellow of the British Academy. A festschrift honoring his work was published in 1995, The Social World of the First Christians: Essays in Honor of Wayne A. Meeks, edited by one of his students and an alum of YDS, L. Michael White.

Although not officially part of our faculty, Wayne was a member of the YDS community. He taught a number of classes here and spent enough time on the Quad while on the faculty of Religious Studies that several have told me that they thought he was on our faculty. Even in retirement, Wayne and his wife, Judith, sometimes attended faculty dinners and social occasions at YDS.

The family is having a private service, with plans for a memorial service sometime later this spring. We will announce it when the arrangements are made. In the meantime, our hearts and prayers go out to Wayne’s wife, Judith Colton, and to his three daughters.

For his tremendous scholarship and warm friendship, Wayne will long be remembered by our community, and greatly missed.