The Issachar Fund has awarded a grant to Yale Divinity School Professor Willie James Jennings to advance his research on the relationship between race, Christianity, and the built environment.

At the center of the project is Jennings’ book in progress, tentatively titled “Reframing the World.” Jennings, Associate Professor of Systematic Theology and Africana Studies, plans to use the book and a related conference to start a conversation in academia and beyond that reimagines the meaning of human beings’ life together both intellectually and geographically in relation to built environments. 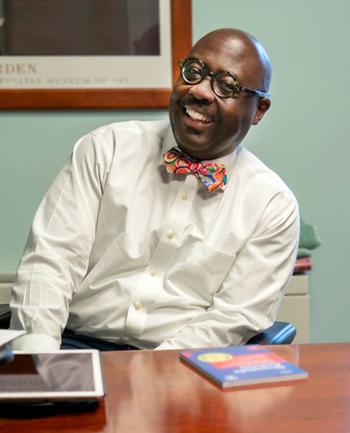 “The formations of race and private property are joined developments in the Western world,” Jennings says. “Yet the importance of thinking about them together has for the most part escaped the academy. The reason for this profound oversight is the failure and sometimes the reluctance to take Christianity and Christian thought specifically, and religion more generally, as the crucial logic that drove these developments.”

Jennings explains that concepts such as ownership, possession, and privacy carry a religious character, and that the history of the struggle over land is inextricably bound up in the history of religions in the Western world. This has “real-world consequences,” Jennings says. “The racial antagonism and gender oppression that characterizes life in many parts of the world is bound up and, to a large extent, energized by the way the built environment has formed and is yet being formed.

“The climate catastrophe that is upon us and the struggles over food, water, and other resources in the Anthropocene all come back to the land and how we understand ourselves as connected or disconnected to the land and animals. Yet serious reflection on the built environment has been the missing link in the way we think about the problems of the Anthropocene in the context of race, gender, class, poverty, and wealth.”

In addition to writing the book, Jennings plans to organize a major conference at Yale on race and place. The plan is to convene an international group of scholars, including Yale faculty members who work in such subject areas as race and gender theory, Christian thought, colonialism, religion, law, forestry and environmental studies, economics, Native American studies, literature, and the arts. In addition, Jennings plans to bring in non-academics who work in real estate, city planning, and architecture as well as land developers and people who work with homeless populations.

YDS Dean Greg Sterling described Jennings’ book in progress as a “bookend” to his first major work, The Christian Imagination: Theology and the Origins of Race (Yale University Press, 2010), which won Grawemeyer Award in Religion, the largest prize for a theological work in North America.

“His receiving this Issachar Fund grant only confirms what all of us know: Willie Jennings is a first-rate scholar who is addressing the major issues that confront us in the twenty-first century,” Sterling said. “Willie sets the bar for Yale faculty high and appropriately so.”

Jennings hopes his Issachar-funded project spurs academia to take more seriously the relation between place, land, and the intellectual life.

“Universities must begin to take a wider view of the scholarly terrain to include the actual terrain,” says Jennings, an ordained Baptist minister who joined the Yale faculty in 2015 after 25 years at Duke Divinity School, where he was both a professor and, for several years, its Academic Dean.

“I have lectured at too many universities and seminaries in the U.S. and Canada that have formed themselves into intellectual and geographic bubbles in their communities and cities,” Jennings says.

“We have an extraordinary opportunity here at Yale to create a conversation that is not happening at any other university but needs to happen—one that brings together scholars, community leaders, and people involved in designing and operating our living spaces in order to imagine together a more just society.”

The Michigan-based Issachar Fund supports scholars, leaders, and organizations that seek religious and scientific truth while learning from, and contributing to, the ideals, values, knowledge, and practices of an increasingly multicultural society.