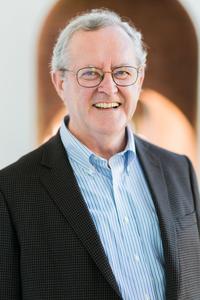 Collins, who joined the YDS faculty in 2000 from the University of Chicago, is the first Yale professor to receive the Burkitt Medal since the late Brevard Childs in 1999. Childs was a professor of Old Testament at Yale from 1958 to 1999.

In his acceptance remarks at the August 28 award presentation (delivered via video), Collins commended Childs and others on the “long and distinguished list of recipients” of the Burkitt Medal. “I am very proud and honored to have my name added to it,” Collins said.

Collins, a native of Ireland, has published two dozen books during his prolific career, including most recently What Are Biblical Values?  (Yale University Press, 2019), which grew out of a popular course he teaches by the same name.

The British Academy awards the Burkitt Medal annually in recognition of special service to Biblical Studies—in Hebrew Bible studies (in odd years) and in New Testament studies (in even years).

Collins last year was inducted into the American Academy of Arts & Sciences.