Harold W. Attridge, Sterling Professor of Divinity at Yale Divinity School, has been elected to the American Academy of Arts & Sciences, one of the nation’s most prestigious honorary societies. 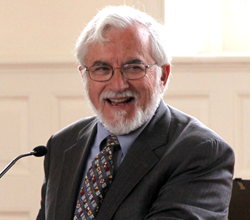 Attridge, who served as Dean of YDS from 2002 to 2012, is a renowned scholar of international standing. His work focuses on the New Testament, Hellenistic Judaism, and the history of early Christianity.

The newly elected members of the Academy include a total of seven Yale University faculty members.

Attridge said he was “surprised and honored” when he received a letter from the Academy informing him he would be joining such luminaries as Albert Einstein, Thomas Jefferson, and Willa Cather on the Academy membership rolls. “I am delighted that scholars in my field thought enough of my work to nominate me,” Attridge said.

Attridge’s publications include Hebrews: A Commentary on the Epistle to the Hebrews (Fortress, 1989) and Nag Hammadi Codex I: The Jung Codex (Brill, 1985), as well as numerous book chapters, scholarly articles, and edited volumes. The latter category includes the HarperCollins Study Bible (Revised Edition, 2006), of which Attridge was general editor. A Boston College graduate, Attridge received his Ph.D. from Harvard in 1975.

“This recognition is well deserved,” said Gregory E. Sterling, Dean of Yale Divinity School. “Harry Attridge has one of the finest minds of any New Testament scholar today and has been a leader in the study of Christian origins for four decades.”

Founded in 1780, the Cambridge, Mass.-based Academy has a membership of 4,600 fellows and 600 foreign honorary members, including many of the most accomplished scholars and practitioners worldwide. Among the new inductees are winners of the Nobel and Pulitzer Prize; the MacArthur and Guggenheim Fellowship; and Grammy, Emmy, Oscar, and Tony Awards. “Each new member is a leader in his or her field and has made a distinct contribution to the nation and the world,” said Don Randel, Chair of the Academy’s Board of Directors.  (For the complete list of new members, see https://www.amacad.org/content/members/members.aspx.)

Attridge and the other new members will be honored in October 2015 at an induction ceremony in Cambridge.