By Emily L. Judd
Yale Divinity School Professor John Hare joins the YDS podcast for its February episode, in which he discusses the relationship between philosophy and religion. 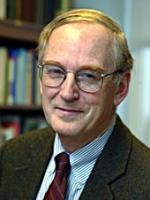 Hare, the Noah Porter Professor of Philosophical Theology at YDS, says both religion and rationality are part and parcel of human society, and he sees philosophical methods as useful in illuminating religious beliefs.

“What philosophy does is explore questions like what is the good human life—questions which arise in the religions but which the religions don’t settle,” Hare says. “Philosophy gives us some equipment for thinking more deeply, more pervasively about those questions.”
Hare views Greek philosophy and his own religion of Christianity as inextricably enmeshed, as evident in the Christian scriptures.
“When I look at the Book of Hebrews, when I look at the Gospel of John, I see philosophy as already there,” says Hare. “I think the idea that Athens and Jerusalem have nothing to do with each other is a mistake.”
Hare also discusses his time working on legislation for the U.S. House Foreign Affairs Committee on Europe and the Middle East. He said the Reagan administration, in office at the time, wanted to certify that all recipients of U.S. assistance were upholding human rights. Hare and others worked to answer the question: What are human rights?  Hare recalls disagreements with the U.S. State Department on the definition.
“Politics operates with values, and often there are values in conflict with each other,” Hare said. “Philosophers and theologians can be helpful in Congress to lay out the middle ground between those very high, very abstract values and the concreteness of policy.”
In the podcast episode, Hare also describes growing up with a famous father, the Oxford philosopher R.M. Hare.
“My father wasn’t really interested in us [children] until we reached what he called the age of reason, which he thought was six years old when we could talk philosophy with him,” says Hare.
Hare discusses the lessons he learned from his father’s life.
“He cared too much for academic prestige,” said Hare. “Recently my wife was diagnosed with multiple myeloma and I’ve been spending most of my time looking after her. It’s made me think academic prestige is not that important.”
Listen to the full episode.
February 11, 2019