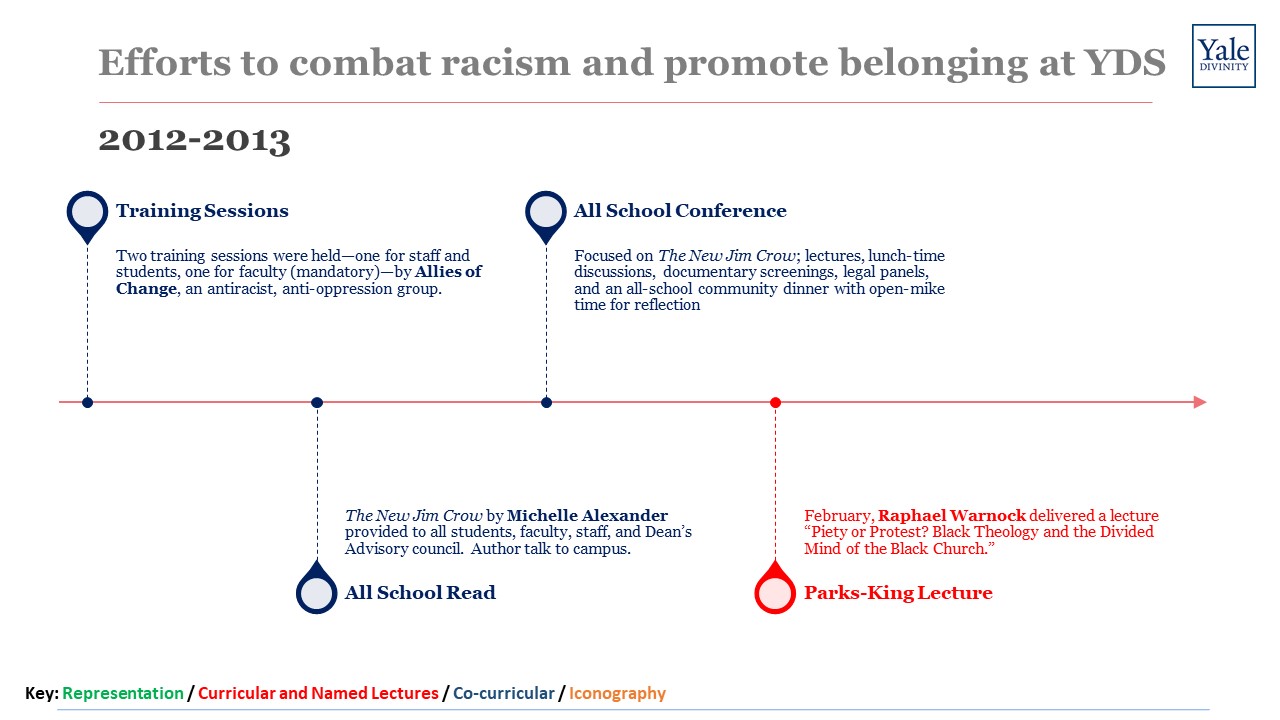 In February, Raphael Warnock delivered the annual Parks-King Lecture, entitled “Piety or Protest? Black Theology and the Divided Mind of the Black Church.”

In 2012-2013, two training sessions were held—one for staff and students, one for faculty (mandatory)—by Allies of Change, an antiracist, anti-oppression group. The training focused on how to have honest, reflective conversations about systematic racism and how faculty can effectively address race and foster diversity in the classroom.

In 2012-2013, YDS devoted the All School Read program to The New Jim Crow by Michelle Alexander. The School provided free copies of the book to all students, staff, faculty, the Dean’s Advisory Council, and the YDS Alumni Board. Alexander came to campus to give an open talk about the book.

That year’s All School Conference also revolved around The New Jim Crow. Events at the week-long conference included lectures by Alexander and others, lunch-time discussions, documentary screenings, legal panels, and an all-school community dinner with open-mike time for reflection.

Almeda Wright was appointed Assistant Professor of Religious Education; she has since been promoted to Associate Professor.

In February, James Forbes, Jr. delivered the Parks-King Lecture, entitled “When Our Actions are Ordered by God.”

In October, Otis Moss III ’95 M.Div. delivered the Beecher Lectures on “The Blue Note Gospel: Preaching the Prophetic Blues in a Post-Soul World.”

In February, Willie Jennings gave the Parks-King Lecture, exploring “Why is Racial Belonging More Decisive and Compelling Than Christian Belonging for Us?”

In fall semester, YDS offered the “Talking Openly About Diversity” training, led by Visions, Inc. The training was billed as a means to understand how bias, modern oppression, and discrimination play out among well-intentioned people, including at YDS.

In spring semester, Professor Teresa Berger (then the chair of the YDS Diversity Committee) offered a film screening and discussion at the faculty meeting focused on unconscious bias and ways to counteract it.

In January, Luke Powery, Dean of Duke University Chapel, spoke in Niebuhr Hall on “Preaching in a Spiritual Key”

Over the course of spring semester, a series of faculty appointments were announced, including the hiring of the following scholars. These brought from three to eight the number of faculty members from under-represented groups holding tenure or tenure-track positions.

In October, Black Lives Matter activist DeRay McKesson came to YDS under the auspices of the Transformational Leadership program to serve as guest instructor for a weekend-intensive course exploring racial justice and the role of social media in effective protest movements. His public event filled Marquand Chapel.

At the faculty retreat in October, Michelle Nearon, Yale’s Associate Dean for Graduate Student Development and Diversity, conducted a training on unconscious bias in the classroom.

In February, Fernando Segovia of Vanderbilt Divinity School gave a lecture at YDS on “Toward Biblical Criticism as Global-Systemic: Analyzing the Global Framework as Departure.”

In April, YDS hosted a lecture by Eddie Glaude, Chair of the Center for African American Studies at Princeton University, on “The Crisis of the Imagination and the Persistence of the Value Gap.”

In April, YDS hosted a conference organized by the La Comunidad Latinx student group, titled, “The Grass is Brown on this Side of the Fence: Reading the Bible from our Own Perspective.”

*Professor Valentin left at the conclusion of the 2019-20 academic year for a faculty position at Boston College.

**Nicholas Lewis served for three years before departing for the Curtis Institute of Music.

In November, Leslie Callahan, Pastor of St. Paul’s Baptist Church in Philadelphia, came to YDS as guest instructor for a Transformational Leadership course on “Continuity and Discontinuity: Leading Beyond Tradition.”

In February, Bryan Stevenson of the Equal Justice Initiative delivered the Parks-King Lecture, stressing the need to confront racial injustice by “getting proximate” and doing “uncomfortable things.”

At the fall faculty retreat, Kim Goff-Crews, Yale’s Secretary and Vice President for University Life, led a training on relating to students from under-represented groups.

The March staff meeting was devoted to a training by Michelle Nearon on “Promoting a Welcoming and Inclusive Campus Environment.”

In April, YDS hosted an introduction to the “Undoing Racism” workshop of the People’s Institute for Survival and Beyond—the first in a series of intro sessions and actual multiday workshops that took place at YDS over two years in partnership with the Community Foundation of Greater New Haven, the Citywide Youth Coalition, and other partners. The introduction sessions and weekend workshops were attended by members of the YDS community as well as others from across Yale and the greater New Haven community.

In spring semester, YDS devoted the All School Read program to Black Theology & Black Power by James Cone. Professor Cone came to YDS to give a well-attended public talk in Marquand Chapel.

In October, YDS named one of its largest classrooms in honor of James Pennington, a formerly enslaved person who sat in on classes at YDS in the 1830s, making him the first Black person to attend classes at Yale.

In November, Pauline Muchina, Director of Healthy Families, Healthy Planet for the United Methodist Church, came to YDS as guest instructor for a Transformational Leadership course on “Leadership in Issues of Faith and Global Health: Gender Dynamics, Sexual and Reproductive Health.”

Tink Tinker of the Osage Nation and the Iliff School of Theology faculty came to YDS to lecture on “Individual Salvation vs. Cosmic Balance: An American Indian Perspective.”

At Convocation and Reunions, YDS dedicated an alumni award recipients “wall of fame” including numerous photo portraits of alumni from under-represented groups. By the end of the 2019-20 academic year, the portraits of eight black alumnae/i were included in the display.

In August, YDS welcomed the most diverse entering class in the school’s history; 35 percent of the domestic total were from under-represented groups.

In February, Kelly Brown Douglas, Dean of Episcopal Divinity School, came to YDS as guest instructor for a Transformational Leadership course on “Theological Leadership in the Public Square: Leadership in Divided Times.”

In February, Bryan Massingale gave the Parks-King Lecture, entitled “‘They Do Not Know and Do Not Want to Know’: James Baldwin, Racial Ignorance, and the Authenticity of Christian Ethics.”

At the February faculty meeting, the “teaching tidbits” were devoted to a presentation by Professor Joyce Mercer on how to have conversations about what people bring to class in terms of race, religious identity, social class, etc.

At the March faculty meeting, the “teaching tidbits” were devoted to a presentation by Professor Clifton Granby on, among other issues, journeying with students during ethically and politically fraught conversations and debate.

In March, Benny Liew of Holy Cross came to YDS to engage in a public conversation with YDS faculty members on “Intersectional Imperatives: Bible, Theology and Ethics Beyond the Binary.”

In spring semester, the All School Read program was devoted to Third World Studies: Theorizing Liberation by Gary Okihiro.

In February, YDS added a photo portrait of the late Lamin Sanneh to the faculty emeriti/ae wall of honor.

In June, YDS installed a painted portrait of Rena Karefa-Smart ’45 B.D. near the Admissions Office. The portrait was a gift from Yale Black Seminarians intended to honor the first African American woman to graduate from YDS.

In August, YDS announced the appointment of Lynn Sullivan as Director of Community Equity—a position dedicated to organizing trainings and events aimed at creating a more equitable community at YDS.

In June, Awet Andemicael ’10 M.A.R. was appointed Associate Dean for Marquand Chapel, becoming the first African American in the position. Her appointment brought to eight the number of administrative staff members from under-represented groups.

In November, Michael Walrund, Senior Pastor of First Corinthian Baptist Church, came to YDS as guest instructor for a Transformational Leadership course on “Avoiding the Slow Walk to Irrelevancy: Leadership in a Time of Innovation.”

Faculty endorses new expectations for attention to diversity, power and privilege in all courses in the M.Div. Core Curriculum.

In February, Russell Jeung, Professor of Asian American Studies at San Francisco State University and an immigrant rights activist, came to YDS as guest instructor for a Transformational Leadership course on “At Home in Exile: Finding Jesus Among My Ancestors and Refugee Neighbors.”

Organized by Dawn Jefferson ’21 M.Div. and a student leadership team, November’s All School Conference, titled “Doing Our First Works Over,” was dedicated to reflecting on relevant applications of multi-faith practices through the hermeneutics of black queer theology.

In Spring Semester 2020, YDS devoted the All School Read program to Breathe: A Letter to My Sons by Imani Perry. Professor Perry came to YDS on March 2 to give a talk about the book in a well-attended event in the Old Refectory.

The fall faculty retreat is completely devoted to antiracism work.

The staff retreat in August is devoted to antiracism work.

A significant portion of August’s senior leadership team retreat is devoted to antiracism work; all members are reading How to Be an Antiracist by Ibram X. Kendi.

YDS art gallery hosted “Allegories, Renditions, and a Small Nation of Women,” an exhibit co-curated by Khaleelah Harris ’21 M.Div. exploring how Black women enlisted Christianity to forge their identities in a context of racism, social change, and cultural migration.

YDS administration released its response to the Task Force report, with acknowledgement of the School’s complicity in slavery and racism and announcement of actions to become more equitable and inclusive institution