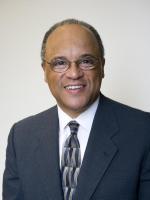 Frederick J. (Jerry) Streets as Senior Pastor of the Mount Aery Baptist Church in Bridgeport, CT. from 1975-1992, led the congregation in significant growth, building a new church edifice and developing many social outreach programs and ministries.

He served as the Yale University Chaplain and Senior Pastor of the Church of Christ in Yale from 1992-2007 where he established a model of multi-faith campus ministry. In honor of Yale’s tercentennial, Yale University Press published his (2005) Preaching in the New Millennium.

In 2008 Professor Streets was a Fulbright Scholar at the University of Pretoria in South Africa where he taught in the Department of Practical Theology and explored the intersection of religious, social welfare and medical institutional outreach services to those affected by, and infected with, HIV and AIDS. He returned to South Africa as a Fulbright Specialist in 2010 to assess the transition of the University of the Free State in Bloemfontein, South Africa in becoming a multicultural and ethnic institution since the fall of apartheid.

He is a member of the Connecticut Academy of Arts and Sciences. Dr. Streets has served as an adjunct Associate Professor of Pastoral Theology at Yale Divinity School since 1987. He is also an adjunct Professor at the Columbia University School of Social Work and in the Spirituality, Mind Body Institute in the Department of Clinical Psychology and Education, Teachers’ College, Columbia University.

A licensed clinical social worker, Professor Streets is the former Carl and Dorothy Bennett Professor in Pastoral Counseling at the Wurzweiler School of Social Work, Yeshiva University in New York City and former Visiting Professor in the Department of Social Work and Latino Community Practice at the University of Saint Joseph in West Hartford, CT.

He also served on the Board of the Fund for Theological Education and the Iranian Human Rights Documentation Center. He was a 2009-10 Fellow of the Connecticut Health Foundation.

He serves as the Senior Pastor of the historic Dixwell Avenue Congregational United Church of Christ in New Haven, CT. Some of his current larger involvements include membership on the Association of Theological School (ATS), The Commission on Accrediting. He is a member of the Harvard Program in Refugee Trauma through which he assists in the training of mental health professionals across disciplines, religions and cultures in providing mental health services to those throughout the world who have been traumatized by war and natural disasters.

A native of Chicago, he has been nurtured by the American Baptist Convention, Progressive National Baptist Convention and United Church of Christ denominations. He has published numerous articles and book chapters, and he is the recipient of many awards.