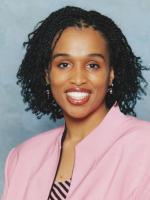 Professor Wright’s research focuses on African American religion, Womanist spirituality, adolescent spiritual development, and the intersections of religion and public life. She is currently finishing a larger project on activist-educators that outlines the radical dimensions of African American Religion and Education throughout the twentieth century.

Prior to her arrival at Yale, Dr. Wright served for four years as assistant professor of religion and youth ministry at Pfeiffer University, and before that as a visiting faculty member and teaching assistant at the Candler School of Theology at Emory University.  At Candler, she also served as program director of the Wisdom of Youth Project and in various positions with the Youth Theological Initiative. She has served as a consultant to the Women’s Theological Center in Boston and has taught at several schools in the Greater Boston area, including Shady Hill School, the Young Achievers Science and Math Academy, and the Martin Luther King, Jr. Open School.

Professor Wright has been privileged to deliver the 2019 Princeton Lectures on Youth, Church and Culture and keynote addresses at the University of Vienna’s Religions@School Conference, the Trinity Wall St. Institute, and the Faith Forward conferences. She also has given research presentations at numerous conferences, including the annual meeting of the American Academy of Religion and the Society of Childhood and Spirituality.

Her research has also been supported by the John Templeton Foundation, the Wabash Center for Teaching and Learning, the Fund for Theological Education and the Louisville Institute.

Professor Wright is an ordained minister of the American Baptist Churches and has served on the ministerial staff of various churches, including Union Baptist Church (Cambridge, Massachusetts) and Victory United Church of Christ (Stone Mountain, Georgia).

Listen to Wright speak about Youth Public Theologicans at the Children, Youth and New Kind of Christianity Conference

Watch an interview with Wright from the Trinity Institute