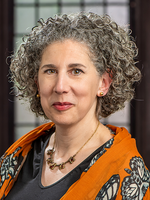 Laura Nasrallah’s research and teaching bring together New Testament and early Christian literature with the archaeological remains of the Mediterranean world, and often engage issues of colonialism, gender, race, status, and power.

Her new book in progress, tentatively titled Rethinking Religion and Aesthetics: “Magic,” Materiality, Language, and Ancient Christianity, uses twentieth- and twenty-first century art—particularly the poetry, paintings, and sculpture of contemporary Black artists—as theoretical frameworks for understanding ritual objects and practices from the ancient Mediterranean world. Paying attention to amulets, curse tablets (defixiones), speaking in tongues, and uses of scripture to curse, the book takes seriously these rituals and ritual objects as aesthetic interventions within the theorizing of matter and language in antiquity, and as attempts—no matter how ethically ambiguous in our eyes—to seek justice.

Her Archaeology and the Letters of Paul (Oxford University Press, 2019; paperback, 2021) focuses on reconstructing the social, economic, and religious contexts of those to whom Paul wrote, focusing on case studies in specific cities and regions. It argues for a clear and different methodology in the use of archaeology in biblical studies, and its chapters attend to the themes of slavery, travel and hospitality, grief, poverty and abundance, as well as Paul’s pseudepigraphical and cultic afterlife. Christian Responses to Roman Art and Architecture: The Second-Century Church Amid the Spaces of Empire (Cambridge University Press, 2010) argues that early Christians such as the Justin, Tatian, Athenagoras, and Clement, in explicitly addressing Greeks and Romans are best understood when read in tandem with the archaeological remains of the Roman world. In this context, the nature and stakes of their arguments about justice, piety, paideia, and the divine image(s) become clearer. Her first book, An Ecstasy of Folly: Prophecy and Authority in Early Christianity, focuses on 1 Corinthians and on materials from the second- and third-century controversies over prophecy and the nature of the soul.

She is also co-editor, with Elisabeth Schüssler Fiorenza, of Prejudice and Christian Beginnings: Investigating Race, Gender, and Ethnicity in Early Christian Studies (Fortress Press, 2009); with Charalambos Bakirtzis and Steven J. Friesen, of From Roman to Early Christian Thessalonikē: Studies in Religion and Archaeology (Harvard University Press, 2010), and, with AnneMarie Luijendijk and Charalambos Bakirtzis, of From Roman to Early Christian Cyprus: Studies in Religion and Archaeology (Mohr Siebeck, 2020). In 2014, she conducted the online course module Early Christianity: The Letters of Paul, offered through HarvardX/edX. Materials from that course can be found on her Letters of Paul website.

Longer term projects include a commentary on 1 Corinthians for the Hermeneia series and a project on visuality and epistemology connected with artistic and literary early Christian interpretations of Ezekiel 1.