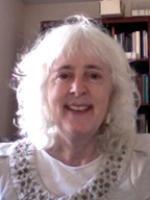 Margaret Olin has appointments in the Divinity School as well as the Department of Religious Studies, the Program in Jewish Studies and the Department of the History of Art. She is the author of three books, Forms of Representation in Alois Riegl’s Theory of Art (Penn State Press, 1992), The Nation Without Art: Examining Modern Discourses in Jewish Art (University of Nebraska, 2001), and Touching Photographs (University of Chicago Press, 2012). With Robert S. Nelson, she edited Monuments and Memory, Made and Unmade (University of Chicago Press, 2003), and with Steven Fine and Maya Balakirsky-Katz, she edits the journal Images: A Journal of Jewish Art and Visual Culture. She is also a practicing photographer, whose photographic work plays a fundamental role in her scholarship. Currently she is engaged in a study of photography and imagination and in several ongoing projects on visual culture and photographic practices in Israel and Palestine. A selection from one of these photographic projects, “Marking Time: Photographs from Dheisheh Refugee Camp, 2014-16, will be shown in Paderborn, Germany, in 2016. In 2012 she curated the multi-venue exhibition Shaping Community: Poetics and Politics of the Eruv at Yale University, to which she contributed the photographic installations “Urban Bricolage” and “No Carry Zone.” Prior to her appointment at Yale in 2009 she was professor in the departments of Art History, Theory and Criticism, and Visual and Critical Studies at the School of the Art Institute of Chicago. Her interests include Jewish spatial practices, theories of perception, and the theory and practice of visual witnessing. Some of these concerns can be followed on the occasional blog, touchingphotographs.wordpress.com.