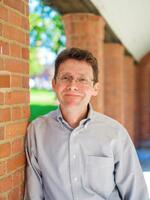 Dr. Grund has a split appointment in the Divinity School and the English Department. He joins Yale from the University of Kansas, where he was a Professor of English Language Studies and award-winning teacher. He is a specialist in the history, development, and current use of the English language. His main research interest is in the connection between language and sociocultural context in historical periods, and he has published widely in this area, including monographs and co-authored books: The Sociopragmatics of Stance: Community, Language, and the Witness Depositions from the Salem Witch Trials (John Benjamins, 2021); Testifying to Language and Life in Early Modern England. Including a CD containing An Electronic Text Edition of Depositions 1560–1760 (ETED) (John Benjamins, 2011; with Merja Kytö and Terry Walker); “Misticall Wordes and Names Infinite”: An Edition and Study of Humfrey Lock’s Treatise on Alchemy(Arizona Center for Medieval and Renaissance Studies, 2011).

Whether Dr. Grund teaches courses on the structure, history, development, or social uses of the English language, his classes explore the implications of the fundamental principle that English is characterized by variation and change. Students develop the skills, language, and knowledge needed to analyze, describe, and understand the factors governing how people speak and write in different situations, where such “conventions” come from, and how they have changed over time and are still changing. Students grapple with the central question of what “right” and “wrong” in language means and seek a more nuanced answer than suggested by that binary. Overall, his courses encourage students to become sophisticated language citizens, realizing the importance of language for identity, relationships, and society in general, as well as recognizing the potential of language both to trigger discrimination and to promote social justice.