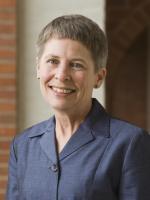 Professor of Religion and Visual Culture; Coordinator of the Program in Religion and the Arts; Professor of American Studies and Religious Studies; and Director, Center for the Study of Material and Visual Cultures of Religion
Phone:
(203) 432-6264 and (203) 432-7070
Email:
sally.promey@yale.edu
Office:
N-210 and HGS 2675
Denomination Affiliation:
United Church of Christ
Education

Professor Promey is director of the Center for the Study of Material and Visual Cultures of Religion (MAVCOR), generously supported by grants awarded in 2008 and 2016 from the Henry Luce Foundation as well as by the ISM and Yale University. MAVCOR’s second project cycle, a five-year international scholarly collaboration titled “Material Economies of Religion in the Americas,” has its first Fellows Seminar in 2017.

On campus, Promey convenes the interdisciplinary Sensory Cultures of Religion Research Group. Prior to arriving in New Haven in 2007, she was chair and professor in the Department of Art History and Archaeology at the University of Maryland, where she taught for fifteen years. Her scholarship explores relations among visual/material cultures and religions in the United States from the colonial period through the present.

Current book projects include a volume on the public display of religion in the United States and one on the co-constitution of American artistic and religious modernities. Most recently, she was contributing author to and editor of Sensational Religion: Sensory Cultures in Material Practice (Yale University Press, 2014); and coeditor, with Leigh E. Schmidt, of American Religious Liberalism (Indiana University Press, 2012). Among earlier publications, Painting Religion in Public: John Singer Sargent’s “Triumph of Religion” at the Boston Public Library received the American Academy of Religion Award for Excellence in the historical study of religion, and Spiritual Spectacles: Vision and Image in Mid-Nineteenth-Century Shakerism was awarded the Charles C. Eldredge Prize for outstanding scholarship in American art. Recent articles and book chapters include essays titled “Material Establishment and Public Display”; “Hearts and Stones: Material Transformation and the Stuff of American Christianities”; “Sensory Cultures: Material and Visual Religion Reconsidered” (coauthored with Shira Brisman); “Mirror Images: Framing the Self in Early New England Material Piety”; and “Taste Cultures and the Visual Practice of Liberal Protestantism, 1940–1965.”

Professor Promey is the recipient of numerous grants and fellowships including a Guggenheim Fellowship, a residential fellowship at the Woodrow Wilson International Center for Scholars, two Ailsa Mellon Bruce Senior Fellowships (1993 and 2003) at the Center for Advanced Study in the Visual Arts, and a National Endowment for the Humanities Fellowship for University Teachers. In 2001 she received the Regent’s Faculty Award for Research, Scholarship, and Creative Activity from the University System of Maryland, and in 2002 the Kirwan Faculty Research and Scholarship Prize, University of Maryland. She was codirector (with David Morgan, Duke University) of a multiyear interdisciplinary collaborative project, “The Visual Culture of American Religions,” funded by the Henry Luce Foundation and the Lilly Endowment Inc. A book of the same title, coedited by Professors Promey and Morgan, appeared in 2001 from University of California Press. In 2004 she was senior historian in residence for the Terra Summer Residency Program in Giverny, France.

She serves on the editorial boards of Material Religion and Images: A Journal of Jewish Art and Visual Culture and is editorial adviser to American Art. She is a member of the Advisory Committee of the Center for Historic American Visual Culture at the American Antiquarian Society and of the Advisory Board for De Gruyter’s new series of publications called “Introductions to Digital Humanities: Religion.” Professor Promey is a fellow of Berkeley College.