Minus was in his dormitory praying before bed when, “I suddenly felt as though God was putting a hand on me and claiming me,” he recalled in a private memoir. “The only way I knew then to make sense of the moment was to regard it as God’s call to me to the ordained ministry of the church.”

In time, the teenager came to understand that his destiny lay at once in the pulpit and beyond the church’s walls.

“I was called,” he wrote, “to serve God’s transformative purposes for the world.” 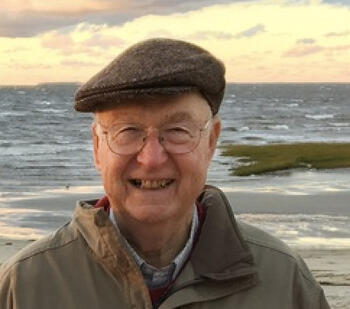 Over the next seven decades, as minister, educator, and activist, Minus dedicated himself to social issues from racial justice to corporate responsibility to environmental stewardship. He ensured that his commitment to humanitarian causes would continue after his death though a generous bequest to Yale Divinity School.

The Minus bequest established two funds at YDS, totaling more than $750,000. The “Paul Minus Environmental Justice Initiative Resource Fund” will support environmental initiatives, including courses, lectures, workshops, conferences, faculty development, and public events. A companion Scholarship Endowment Fund will provide financial aid to YDS students, with a preference for those pursuing environmental studies through the M.A.R. concentration in Religion and Ecology or the joint-degree program with the School of the Environment.

The funds move the school closer to Dean Greg Sterling’s vision of inspiring and equipping YDS students to become “Apostles of the Environment.” Initiatives to make the Divinity Quad a model of environmental action include expanded academic programming, the hiring of new faculty, and the groundbreaking this spring for the Living Village, the first major living-building student residential hall in the college and university sector.

A regenerative residential hall designed to be the largest living-building housing complex on a university campus: Read more about the Living Village project.

The bequest is a tremendous boost to the School’s ability to fulfill its environmental goals, said Sterling. It will allow YDS to host lectures, symposia, conferences, and related events “connecting social justice to environmental concerns,” said the Dean. The Minus Funds “tie together two major, interrelated concerns that we have and that Paul shared.”

Minus began his relationship with Yale in 1951. As a tenth grader in Charleston, S.C., he was nominated for an experimental program funded by the Ford Foundation to, as he wrote in his memoir, “discover whether talented high school students could succeed if they entered college earlier than normal.” At Yale, he failed his first exam and briefly considered returning home, but soon found his academic legs and his life’s calling. By Christmas break “my academic nosedive was over and I was on the Dean’s List,” he recounted. 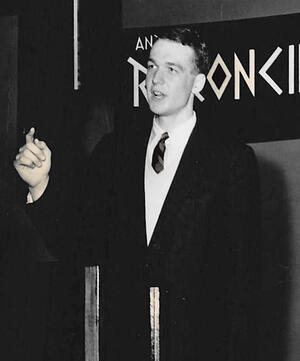 After graduation, Minus stayed at Yale to earn a Master of Divinity degree at YDS and a Ph.D. in modern Catholic ecumenicalism. He worked during this time as a graduate assistant for legendary Yale Chaplain and peace and justice icon William Sloane Coffin.

His doctoral years coincided with “the era of John F. Kennedy, Martin Luther King, Jr., Nelson Mandela, Pope John XXIII and ‘We Shall Overcome,’” Minus reminisced. “It seemed that far-reaching transformations of the old order were now possible.”

Minus went on to a long career as a professor of church history at the Methodist Theological School in Columbus, Ohio. He had scarcely arrived there in 1964 when he and a mixed-race group of protestors were arrested in Jackson, Miss., for “disturbing public worship.”

By the time the resulting convictions were overturned by a U.S. Court of Appeals, Minus had honed an appetite for activism. As a clergyman and academic, he went on to take public stands against what he regarded as predatory state lotteries, the profit-driven promotion of infant formula over breastfeeding, and the erosion of corporate ethics.

Throughout, Minus advocated constructive engagement over the polarizing effects of boycotts and other direct action. In the ecumenical spirit of his day, much of his effort was focused on forming interchurch coalitions to speak in a unified voice.

“Dad believed that education and dialogue could change peoples’ minds and, through this, their actions,” said his son, Stephen Minus. As an example of Paul’s public witness, he remembers his activist father “being interviewed by a TV crew on the front lawn of our house.”

During a recent telephone conversation from his home outside San Francisco, Stephen stressed that his father’s advocacy was an outgrowth of his faith. Christianity and social justice “were intertwined,” for Paul Minus, his son said. He believed that “improving the world [was] the duty of every Christian.”

The elder Minus was deeply influenced by the Social Gospel writings of the reformist theologian Walter Rauschenbusch. In 1988, he published a biography of Rauschenberg, one of seven books he wrote or edited in his lifetime.

In 1999, Minus left the Midwest to retire on Cape Cod. The move sowed the seeds of the Minus Funds.

Living closer to New Haven allowed the old Yalie to participate more fully in the life of the Divinity School. He served two terms on the YDS Dean’s Advisory Council and taught a class on religious belief and public service called “Faith in the Workplace.”

Meanwhile, the beauty and fragility of Cape Cod’s maritime ecosystem sparked an awareness of the global environmental crisis. He was soon leading local stewardship and sustainability groups, becoming a member of the board of the Cape Cod Climate Change Collaborative, an affiliation of policy, business, education, and faith groups fighting the effects of climate change. For the collaborative, he organized the Faith Communities Environmental Network, a multi-denominational group of regional churches dedicated to raising environmental awareness.

“I was helping to awaken people in the churches to the importance of their ecological mission,” Minus wrote in his memoir.

As his son recalled, “He’d found his new passion.” 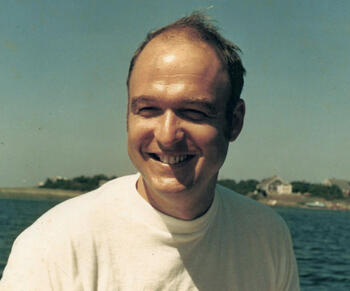 Sterling knew of Paul Minus from his books when he was invited to spend a weekend on the Cape with Minus and wife Jean. Minus had been moved by Sterling’s essay about the ethical dimension of the climate crisis, published in the Spring 2019 issue of the YDS journal Reflections. Their meeting, Stephen Minus recalled, began an “ongoing dialogue” about faith, environment, social justice, and the Dean’s vision for the Divinity School. The discussion explored ways that Minus could aid his alma mater.

As part of the Dean’s Advisory Council, Minus had, as he wrote, “nurture[d] several ventures yoking faith and ecology.” The Minus Funds became the logical outgrowth of those ventures. Details were worked out just before his death at age 85 in February 2021.

“Dad actually did the work of establishing these funds himself,” said his son. “He was very involved with helping precisely craft their purpose and the language used to describe them.”

With the bequest, Minus found a way to further his activism that was aspirational and practical.

“He was a pragmatist,” said Stephen of his father. “He had faith in the future, but he worked very hard to make sure [his efforts] actually took effect.”