The YDS Dean’s Advisory Council, joined by Yale President Peter Salovey, members of the George and Carol Bauer family, and the design team for the School’s Living Village, gathered in New York on May 5 to celebrate the Bauers for making the unique regenerative building project a reality. 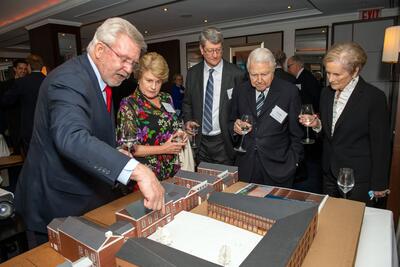 Years in the making, the success of the Living Village is a remarkable testament to the generosity of the Bauers and the commitment of the greater YDS community, declared Christopher Glenn Sawyer ’75 M.Div., Chair Emeritus of the Council. “This story is a marvelous reminder,” Sawyer said, “of the life, faith, and hope that are at the center of everything that we study and pursue at YDS.”

Groundbreaking is set for early 2023 for the Living Village, a student residential complex that is designed to meet the rigorous standards of the Living Building Challenge (LBC). Among other “firsts,” the complex is designed to be the first living-certified LBC project in the Ivy League and, when opened in 2024, will be the largest living building in the higher education sector.

President Salovey hailed the Bauers for being “the first to step forward at every stage of this project—from the first feasibility study to the cornerstone gift for its construction.” 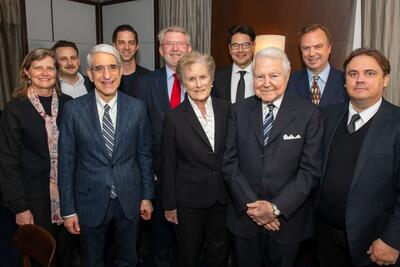 Salovey said that cornerstone gift—the largest donation in YDS history—in combination with the Bauers’ wise counsel and subsequent donations “will help Yale lead the way to a greener future. I would like to express my heartfelt appreciation, and that of a grateful university community, for your support of the transformative project we commemorate tonight.”

YDS Dean Greg Sterling recalled several key junctures at which the Bauers provided the financial wherewithal for continued progress on the net-zero-energy Living Village: first, when initial planning funds were needed; next, with their cornerstone $15 million donation in 2020; and again, in 2021, with a gift of $5.5 million that set the stage for groundbreaking.

“I can’t say ‘thank you’ enough,” Sterling told the Bauers. “Every one of us have been touched profoundly by your generosity in your life.”

In a stirring speech to close the event, George Bauer reflected on a series of “right place, right time” moments that led to success in his life and career. The holder of undergraduate and master’s degrees from Washington University in St. Louis, both in engineering, Bauer held a variety of executive positions at IBM for 31 years. Upon retiring in 1987, Bauer founded an investment banking firm, The GPB Group Ltd. He also sits on several corporate boards. 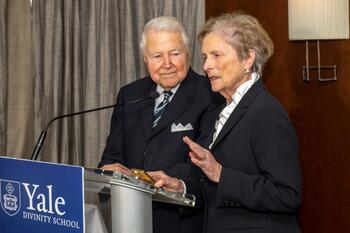 Carol Bauer has served for decades as a chaplain at Norwalk Hospital in Connecticut, often teaching YDS students who come to the hospital for their internships. She has also served as the hospital’s board chair and, along with her husband, has provided it with generous philanthropic support.

The Bauers have three children and five grandchildren; two of the former and two of the latter attended the celebration dinner.

“With our journey have come financial rewards,” George Bauer said in his closing remarks. “However, this good fortune is not uniquely ours. It is a trust to be stewarded toward the common good. There were many others with high ambitions and energy levels in our generation, but we were at the right place at the right time from the beginning.

“Carol and I feel that with the Living Village, Yale Divinity School is also at the right place at the right time.” 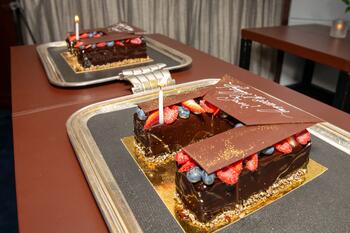 YDS, Mr. Bauer said, “attracts great students and gives them a first-class theological education. What better way to do this than by contributing to the salvation of the planet, and what better contribution to the common good than to teach young people how to (build) community.”

Following his speech, Mr. Bauer was presented with a birthday cake and rousing rendition of “Happy Birthday” in celebration of his 91st birthday—which coincided with the celebration dinner.