More than 300 alums, friends, and campus community members congregated on the Quad for Convocation and Reunions Oct. 12-15—the first in-person enactment of the annual gathering since the COVID-19 pandemic. 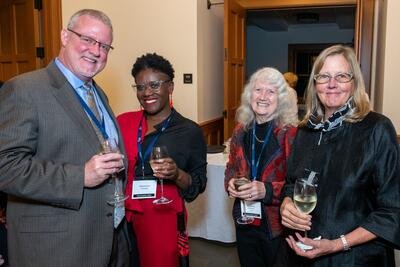 For the first time in recent memory, the event was scheduled while classes were in session, allowing for welcome interactions between students and alums.

“To see so many alums and friends return to campus in person, and to witness their joy at meeting and interacting with students and one another, was truly uplifting and greatly overdue,” said Deborah Jagielow, Director of Alumni/ae Engagement and Annual Giving. “Our thanks to all who joined this wonderful celebration of the School we hold in such high regard.”

Along with a dinner to celebrate the YDS Bicentennial and the launch of the School’s “We Are Called” fundraising campaign, the four days were highlighted by a moving Alumni Awards ceremony, several endowed lectures, a panel exploring YDS at 200 years, and a gathering of the Class of ‘71.

Five alums from the worlds of church, academia, and public service were celebrated at the YDS Alumni Awards celebration held at the Greenberg Center (adjacent to the Quad) on Oct. 13. The honorees were: 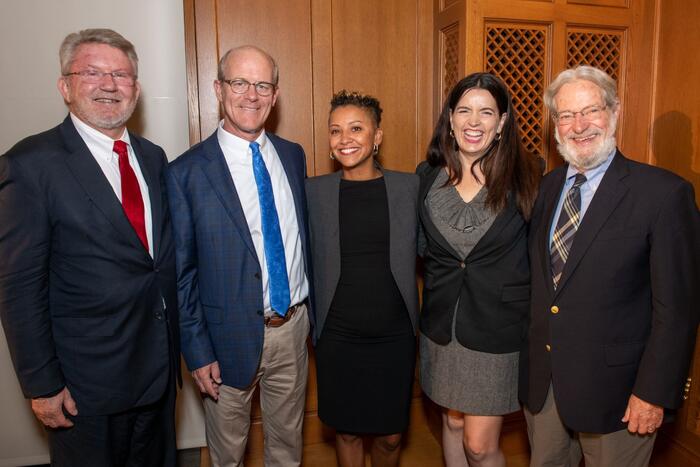 “All of my life I felt called to make a difference, to make the tragedies and vagaries of life less hard for others, which led to a strengthened to call to ministry and law,” said Chris Coons ’92 M.A.R, ’92 J.D., a United States Senator from Delaware who received the Lux et Veritas award, which is given for excellence and distinction in applying the compassion of Christ to the diverse needs of the human condition.

“For me, Yale Divinity School was an incredible, special, and central place,” said Coons, who was kept in Washington by Senate business and spoke through a video feed. “It was a challenging and important community made up of students and faculty from such widely different interpretations of scripture, and from such different faith communities and understandings of what it means to live a life of purpose and faith.”

Bicentennial and ‘We Are Called’ campaign celebration

On the Friday evening of Convocation, members of the Dean’s Advisory Council and campus community, along with YDS alums and friends, gathered in the Old Refectory for a dinner celebrating two milestones: the YDS Bicentennial and the official launch of the “We Are Called” fundraising campaign. The $130 million fundraising effort seeks to support students, academic programs, justice work, and construction of the first major living-building student residence hall in the college and university sector. 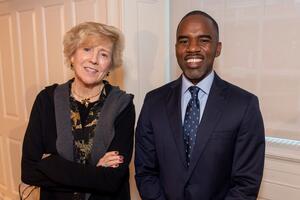 YDS launches ‘We Are Called’ campaign: Read more and watch the campaign video.

The evening culminated in a toast by Emeritus Professor and former Dean Harold Attridge, who is chair of the school’s Bicentennial planning committee. “Join me in toasting the mission to which we have been called,” Attridge declared, “the mission to bring light and truth to church and world. A mission we’ve pursued for some 200 years. And which, with the help of God, we’ll continue to pursue for many generations to come. To the ‘Grand Errand!’”

In addition to celebrating and reflecting on 200 years of YDS as a distinct school at Yale, the yearlong observance is reflecting on the present and future of YDS. The former was the focus of a panel event on the Friday morning of Convocation. Dean Greg Sterling moderated as a current student and three alums from different eras offered their perspectives on the School and its meaning today. 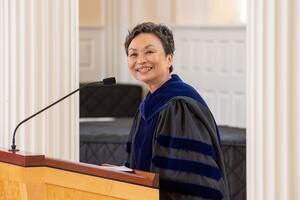 An annual highlight of Convocation, the Beecher Lectures are one of the world’s longest-running and most prestigious lectures series on preaching. In giving her lectures on “Preaching Jesus: Postcolonial Approaches,” Eunjoo Mary Kim of Vanderbilt Divinity School became the first Asian woman to deliver the lectures.

Giving the annual Ensign Lecture was Scott Thumma, a sociology of religion scholar who studies congregational dynamics. Thumma, Professor of Sociology of Religion and Director of the Hartford Institute for Religion Research at Hartford International University, spoke on “An Endemic Church: Exploring its Perils and Possibilities.” View the lecture here. 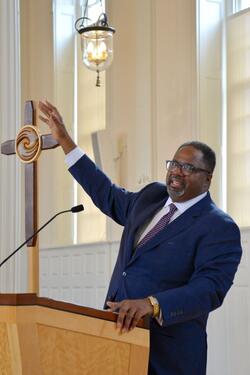 Andover Newton Seminary—celebrating its fifth year at YDS—featured Jeffrey Haggray ‘88 M.Div. as its plenary speaker for Convocation. Haggray, Vice Chair of the ANS Board of Trustees and Executive Director of the American Baptist Churches Home Mission Society (also a YDS alum), gave a talk bearing the same title as Andover Newton’s theme for the year, “Leading with Love.” View the ANS plenary here.

Berkeley Divinity School, which this fall is marking the 50th anniversary of its affiliation with YDS, invited Michael Battle ‘90 S.T.M., Professor of Church and Society and Director of the Desmond Tutu Center, to give its annual Cheney Lecture. Battle spoke on “Ubuntu as Atonement Theology.” View the lecture here.

Delivering the annual Kavanagh Lecture of the Institute of Sacred Music was Harald Buchinger, Professor of Liturgical Studies at the University of Regensburg in Bavaria. Buchinger’s talk focused on “Dramatic Liturgy and Its Media Between East and West.” View the lecture here.

In addition, moral movements leader William Barber gave a rousing lecture on the final morning of Convocation. Barber, President of Repairers of the Breach and Co-Chair of the Poor People’s Campaign: A National Call for Moral Revival, spoke on “We Must Have a Moral Pentecost and Third Reconstruction to Address the Poverty and Pain of This Moment.” View the lecture here. 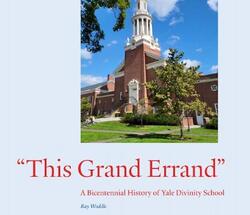 To mark the Bicentennial, YDS commissioned longtime Reflections editor Ray Waddle to write a history of the School. On the Thursday morning of Convocation, a crowd assembled in the Old Common Room to celebrate a result that was three years in the making: the release of “This Grand Errand”: A Bicentennial History of Yale Divinity School. 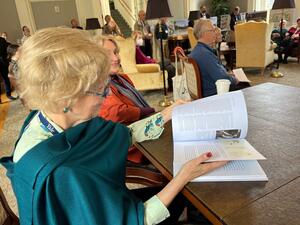 “What was striking to me from the start,” Waddle reflected in his brief remarks, “was how steady the mission of the School has been—Christian-centered but in urgent conversation with the changing culture around it.” YDS, he added, “has always been doing something different, harder, and more interesting than many peer institutions. That was true in 1822, it’s true in 2022. Today, YDS remains rooted in Christian commitments but is bringing great attention to applying those commitments to all sorts of issues in this turbulent society and reinterpreting them when needed in order to respond with charity, justice, and insight to crisis after crisis.”

Class of 1971 reunion and gift 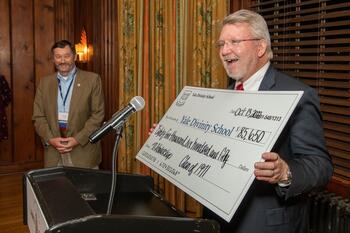 Celebrating their 50th reunion was the Class of 1971, which gathered for memorial service, memories-sharing, a special lecture by class member Will Willimon ‘71 M.Div. on “The Future of Preaching and Worship,” and special celebration dinner at the New Haven Lawn Club. At the dinner, the class presented a gift of $85,650 to establish Class of 1971 Scholarship Fund.

Convocation 2022: View our gallery of images.