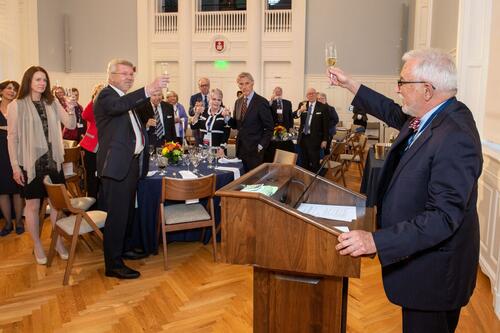 The “We Are Called” campaign seeks to raise $130 million, of which more than $80 million is raised to date. The Divinity School’s effort is part of Yale’s “For Humanity” campaign, which is raising $7 billion for the sciences, the arts and humanities, increased financial aid across the university to develop the next generation of leaders, and integrated responses to the world’s greatest challenges.

“We Are Called: The Campaign for Yale Divinity School” advances the following priorities:

Before a crowd in the Divinity School’s Old Refectory, Emeritus Professor and former Dean Harold Attridge delivered a rousing toast to the campaign and the 200th anniversary of the Divinity School as a distinct school at Yale, which is being celebrated over the course of the 2022-23 academic year.

“Join me in toasting the mission to which we have been called,” declared Attridge, Chair of the School’s Bicentennial Committee, “the mission to bring light and truth to church and world. A mission we’ve pursued for some 200 years. And which, with the help of God, we’ll continue to pursue for many generations to come. To the ‘Grand Errand!’”

Editor’s Note: Look for more coverage of Convocation 2022 on YDS social media and in next month’s Notes from the Quad.

The Honorary Co-Chairs are George and Carol Bauer, who have been the lead donors to the Living Village project. George Bauer is a business leader and longtime member of the Dean’s Advisory Committee, and Carol a mentor to numerous YDS students training to become hospital chaplains.

The campaign Co-Chairs are Nancy Taylor ’81 M.Div. and Elijah Heyward ’07 M.A.R. Taylor is the recently retired Senior Pastor of Old South Church in Boston, a member of the board of numerous nonprofits in Boston, and the past Co-Chair of the YDS Dean’s Advisory Council. Heyward is the former Chief Operating Officer of the International African American Museum in Charleston, S.C., and now an officer for a private foundation in New York.

The Dean’s Advisory Council Co-Chairs are Sam Croll ’75 M.A.R. and Beth Johnson ’84 M.Div. Croll is Chief Executive Officer of CR Ocean Engineering. Johnson is a consultant and United Church of Christ minister who serves as Minister for Clergy Health & Vitality for the UCC’s Southwest Conference. 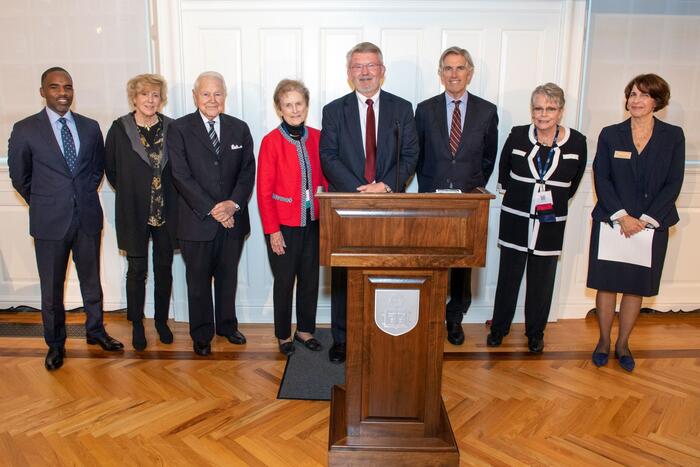 At Friday’s campaign launch, Taylor and Croll saluted Sterling for his decade of transformative leadership of Yale Divinity School. Sterling has been reappointed for a third term by Yale President Peter Salovey and is now in his 11th year.

“We would not be where we are without your exemplary leadership,” Taylor told Sterling, “and your very hard work. Under your leadership the school punches way above its weight, with a mission both high and holy and tender and fierce.” 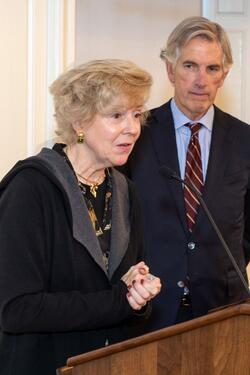 A grateful Sterling responded by referencing the campaign theme. “The motto ‘We Are Called’ is why I am here,” he said. “I don’t do what I do as a job. This is my life. This is how I live.” Gesturing to the alums and supporters in the audience, he continued, “And it’s your life. It’s how you live, in your world. It’s because we’ve done this together that we’ve been able to accomplish the things we have.”

The evening concluded with a prayer by the incoming President of the Alumni Association, Jason Turner ‘06 M.Div., who is Senior Pastor of Mississippi Boulevard Christian Church in Memphis. Turner succeeds Alisha Lola Jones ‘07 M.Div., an Associate Professor in the Faculty of Music at the University of Cambridge in England.