The gospel & politics: Head of leadership program weighs in

Weeks before Yale Divinity School launched its Transformational Leadership program in 2015, controversy flared. The program, which brings outside leaders to campus to educate and inspire students at weekend-intensive courses, felt a backlash after news came out that the first guest instructor would be Black Lives Matter activist Deray McKesson. 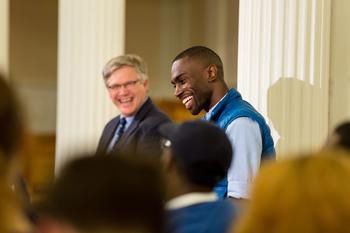 Associate Dean Bill Goettler, who directs the leadership program, did not back away then and does not back away now as the program begins its fifth year.

“Several years have passed, and it is now clear to me the criticism was misinformed and pretty reactionary,” Goettler says. “Deray McKesson is part of a national civil rights movement that is about justice.”’

Listen to the new episode of the YDS Quadcast: “How to be a Transformational Leader”

Some news outlets described the choice to invite McKesson as divisive and falsely reported that McKesson would lecture on looting. U.S. Senator Rand Paul, R-Ky., even called the course “crazy” and said he wouldn’t pay for his children “to take a class from somebody lecturing on the benefits of looting.”

McKesson’s class was not about looting. The one-credit course focused on the use of social media in a justice movement. “It was about the possibilities for a better society, and students learned a lot from McKesson,” Goettler says.

Subsequent speakers chosen for the program include Michael Pfleger, a Chicago-based Roman Catholic priest and activist, and William Barber, a North Carolina-based minister and activist. Both Pfleger and Barber have been attacked for their political roles.

Goettler disagrees with the argument that religious leaders should stay out of politics.

“I think the gospel is entirely political. It is not partisan, in that it is not interested in one party’s agenda. But it is interested in the way society lives together–and refuses to live together,” Goettler says.