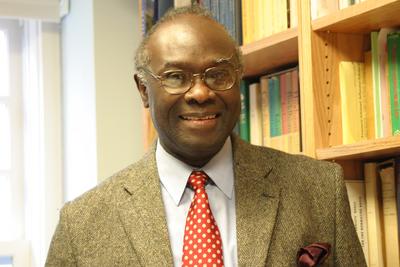 I am writing to inform you of the sudden and unexpected death of Lamin Sanneh, D. Willis James Professor of Missions and World Christianity at Yale Divinity School. Many of us were with Lamin just before the Christmas break when he was anticipating the arrival of his family and the celebration of Christmas. An announcement like this seemed unimaginable; however, Lamin suffered a stroke and died on Sunday, January 6th, surrounded by his family. I know that many of you will receive this news as I did—with shock. 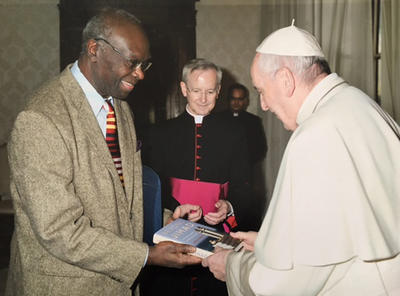 Lamin was the author or editor or co-editor of twenty books and monograph-length essays and well over 200 articles and chapters in scholarly venues. Some of the most notable books include Translating the Message: The Missionary Impact on Culture (Orbis, 1989; 13th printing 2002; 2nd ed., 2009), Abolitionists Abroad: American Blacks and the Making of Modern West Africa (Harvard University Press, 2000; selected for review in The New York Review of Books), Whose Religion is Christianity? The Gospel Beyond the West (Eerdmans, 2003; trans. into German, 2013), Disciples of All Nations: Pillars of World Christianity (Oxford, 2008), Beyond Jihad: Pacifist Impetus in Muslim West Africa and Beyond (Oxford, 2016), and The Wiley-Blackwell Companion to World Christianity, co-edited with Michael McClymond (Wiley, 2016). His work was widely recognized for its quality. He was made Commandeur de l’Ordre National du Lion, Senegal’s highest honor, in 2002 and received the Marianist Award from the University of Dayton in 2011.

Lamin and Andrew Walls set up a program of World Christianity conferences that alternated between Yale and Edinburgh each summer and brought distinguished international scholars to each university. He was a member of the board of Overseas Ministry Study Center and the key link between the OMSC and YDS. Lamin also had an appointment as Professor of History and Director of the Project on Religious Freedom and Society in Africa at the Whitney and Betty MacMillan Center for International and Area Studies at Yale.

Lamin’s work was recently recognized by the University of Ghana in its establishment of the Lamin Sanneh Institute, which will promote scholarly research into religion and society in Africa, especially emphasizing the roles of Christianity and Islam, the two areas of Lamin’s expertise.  You can read more about the new Sanneh Institute here.

Lamin’s story is remarkable by any standard of measurement. It is best understood in his own words in Summoned from the Margin: Homecoming of an African (Eerdmans, 2012). I thought enough of Lamin and of his autobiography that I selected Summoned from the Margin as a present to send to all of the major donors of the Divinity School last month. I had no idea when I selected it that it would become a final testament to his life.

Our prayers and thoughts go out to Sandra, the children, and the grandchildren, who will miss their husband, father, and grandfather. We will miss him too. I often asked him to lead faculty processions. He had inherited a regal dignity that lent itself well for such occasions. He was a remarkable individual whom I am grateful to have known.