Scholars and leaders gather at Sanneh Institute inauguration in Ghana

Editor’s Note: John Azumah is Executive Director of the Sanneh Institute and Visiting Professor at YDS.

Over the final days of February, Christian and Muslim scholars, religious leaders, students, family, and invited guests gathered to celebrate the inauguration of The Sanneh Institute at the University of Ghana in Accra, Ghana. 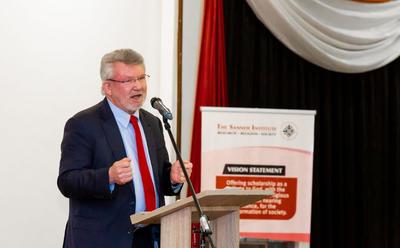 The new institute is named for the late Lamin Sanneh who until his death in January 2019 was the D. Willis James Professor of Missions and World Christianity at Yale Divinity School and Professor of History at Yale University. The Sanneh Institute seeks to build bridges of mutual understanding in West Africa by “offering scholarship as a tribute to God, with the religious and non-religious ‘other’ within hearing distance, for the transformation of society.”

At an academic conference held February 26-28, 61 Christian and Muslim scholars and leaders from around the world delivered and discussed almost 40 papers on the theme of “Territoriality and Hospitality: Christians and Muslims sharing common space.”

A delegation including YDS Dean Greg Sterling; Sanneh’s widow and son, Sandra and Kelefa, respectively; the Gambian High Commissioner to Ghana; and local institute board members were received by the Vice President of the Republic of Ghana, Dr. Mahmudu Bawumia, a Muslim himself and an advocate of inter-religious harmony. Dr. Bawumia pledged his own support for the institute and the support of the Government of Ghana.

On the evening of Friday, Feb 28, Dean Sterling hosted a festive banquet at the Holiday Inn Hotel in Accra for conference participants, Sanneh family members, and invited guests. 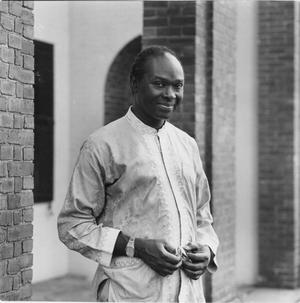 “The very best scholarship is rooted in the existential character of the scholar. For Lamin this was the relationship between Islam and Christianity,” Sterling said at the dinner. “This was not simply the focus of his research, it was the essence of his life. He was a Muslim and a Christian at different stages in his life, commitments that never left him. He studied both traditions with the same care. … He was devoted not only to understanding the two traditions, but helping the two traditions to co-exist in peace.”

The institute’s Inaugural Lectures were held on Saturday, February 29, on the campus of the University of Ghana. The former Archbishop of Canterbury, Dr. Rowan Wlliams, and Professor Farid Esack, a Muslim theologian at the University of Johannesburg in South Africa, delivered inspiring and thought-provoking lectures on the theme. Sanneh’s son, Kelefa, addressed the crowd of more than 1,000 people on behalf of his family.

In his lecture, Dr Rowan Williams talked about God’s transcendence and what this could mean for human existence. Dr. Williams underscored the fact that God is sovereign over all space. Rather than belonging to any space, Williams argued, God belongs to a form of reality in which God depends on nothing but himself. In this way, humans do not invite God into their space. Rather, God invites all of humanity into the fullness of God.

Williams cautioned that the territorial and temporal character of humankind can often lead to the tendency of appropriating God to a particular place or people. Such appropriation of God to finite things can be termed idolatrous.

For his part, Dr. Farid Esack underscored the need to make space for the other, drawing on Islamic texts and history to buttress his point. Taking a cue from multiple Qur’anic references to God as The Greatest, Esack pointed out that humanity owes everything to God. Consequently, the most appropriate response to God’s benevolence is to eschew reducing God to religious and national boundaries and to let God be God and to celebrate diversity as a gift from God.

The inaugural events were funded and sponsored by The Blankemeyer Foundation, Yale Divinity School and the Centre for Early African Christianity.