“The soul won’t bear the inauthentic life,” author, lecturer, and spiritual activist Parker J. Palmer told an audience of more than 100 students, faculty members, and visitors at Yale Divinity School September 23. Palmer, who journalist Krista Tippett ‘94 M.A.R. describes as a “Quaker wise man,” spoke for more than 90 minutes about building a life in which the soul is “divided no more,” and how that commitment animates social change.

The event filled the Common Room at YDS with a standing-room-only audience of listeners raptly attending to Palmer’s measured, self-effacing, and passionate message. His public talk was in conjunction with an intensive two-day Transformational Leadership seminar offered by the Divinity School, which Palmer led with his workshop partner Marcy Jackson. Palmer and Jackson co-founded the Center for Courage and Renewal, a nonprofit that promotes the concepts Palmer has developed. 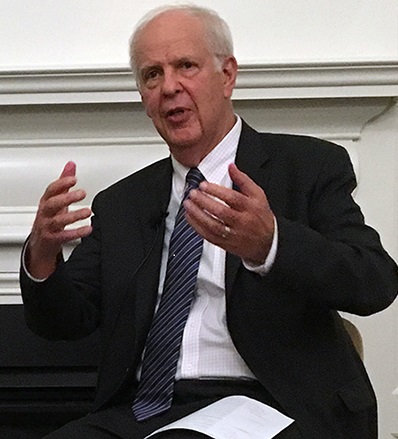 Dean of Leadership Initiatives and Ministry William Goettler organized the Transformational Leadership Program and joined Palmer in the discussion. The evening alternated between a public conversation and a self-actualization teach-in, as Palmer described the connection between world-changing social movements and the soul life of individuals. “The world is shaped not by one big act,” he said, “but by a million-million micro-acts.”

Palmer is author of nine books, including Healing the Heart of Democracy: The Courage to Create a Politics Worthy of the Human Spirit. He stressed the importance of an “inner and the outer exchange” of self-knowledge and action, using the image of a Möbius strip, a mathematical model constructed by twisting a length of paper and joining the edge. The resulting surface has only one side—the strip merges from inside to outside and back again in continual, seamless transition.

“That’s exactly how life works,” Palmer said. “Every moment of every day, you and I are making choices of what we bring forward from ourselves.” Whether anger or compassion, greed or generosity, fear or faith, “those choices shape the outer world,” he said.

“And then the world throws stuff back at us … and we make choices about how we internalize and appropriate them.”

The task, he said, is to become more aware of the points of interaction that allow us to “make choices that are, on balance, more life-giving than death-dealing.”

Much of the evening focused on what Palmer calls the “Movement Model of Social Change.” True to the Möbius strip metaphor, the lessons were illustrated with details from the speaker’s personal life. “I’m a seminary dropout,” Palmer quipped, allowing that “God actually told me to leave” after a year at Union Seminary. Following his Ph.D. in sociology from UC Berkeley, Palmer, rather than accepting one of several prestigious academic positions offered him, was called “to use my [degree] in the streets,” becoming a community organizer in Washington, D.C. He later lived for 11 years in the “radical equality” of an intentional Quaker community. Palmer spoke also of enduring “three deep dives into clinical depression.”

Observing that cynicism, “doesn’t seem a fit way for a grown-up to live,” the author said, “Hope keeps me employed; it keeps me engaged.

“Hope is not only an inner virtue that I find just makes sense. It’s a virtue in the lives of a lot of people … who will never be famous, never make headlines … but are contributing to micro-movements that add up to big change.” 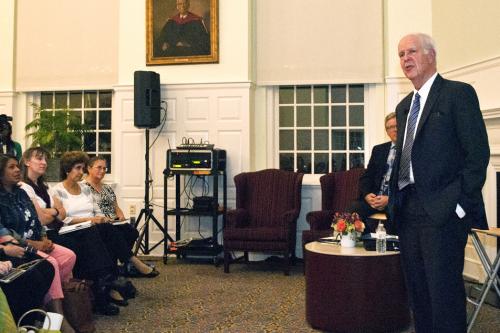 Palmer described the first stage of his social change model as “that moment of spark where an individual makes the absolutely critical decision to no longer behave on the outside in a way that contravenes some profound truth about themselves that they hold on the inside. It’s the decision to show up in the world as you really are.” This “Divided No More” commitment, he said, can result in individual transformation,  relational shifts, and potentially historic cultural change. “I sometimes call this the Rosa Parks moment,” he said. “[It’s] a moment of existential courage.”

It is also an act of liberation, he promised.

“I can think of no sadder way to die than with a sense that I never showed up in the one life I was given as myself, to the fullest extent I knew possible. That I had worn a mask the whole time … that I had been going through the motions.”  As listeners murmured agreement, Palmer continued. “Once a person understands that, all the risks are relativized.”

The remainder of the conversation outlined the succession of Palmer’s change model, moving from stage two, the “underground stage” of finding like-minded collaborators and forming a “community of congruence,” to stage three, when movements enter the public eye. Going public, he said, attracts both converts and critics. “I deeply value the critics,” he said. “Critics force me to refine my craft.”

Palmer encouraged ministerial leaders and divinity students to speak out about “the importance of the undivided life and where the courage comes from to call people to something new.” The Church, he said, “has more potential than any institution in society for providing the kind of [guidance] I am talking about.” Speaking of retreats he has led, he added, “I can’t tell you how many people have said, ‘I always hoped church would be this way.’”

As the evening drew to a close, an audience member asked Palmer to speak about the importance of prayer in his life. “That is a  hard word in my vocabulary,” he admitted. “I get the concept, but the word isn’t very actionable for me.” Meditation and contemplation constitute much of his prayer life, “in silence, alone or in a Quaker community.” He finds solace, too, from walking in the woods, “where I let things come to me, instead of pushing the river.”

Palmer said his prayer life has been influenced in part by Henry Nouwen, the late spiritual writer and one-time YDS professor with whom he had a long and close friendship.