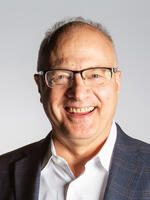 Gregory Mobley is a Professor of Hebrew Bible and Congregational Studies at Andover Newton Seminary at Yale Divinity School. Mobley came to Yale in 2017 after twenty years of teaching Old Testament/Hebrew Bible at Andover Newton Theological School (1997-2017) and at Union Theological Seminary in New York (1996-97). He is the author of three books: The Return of the Chaos Monsters—and Other Backstories of the Bible (Eerdmans, 2012), Samson and the Liminal Hero in the Ancient Near East (T & T Clark, 2006), and The Empty Men: The Heroic Tradition in Ancient Israel (Doubleday, 2005). He co-authored with T. J. Wray The Birth of Satan: Tracing the Devil’s Biblical Roots (Palgrave, 2005) and co-edited the award-winning anthology of essays on interfaith learning, My Neighbor’s Faith: Stories of Interfaith Encounter, Growth, and Transformation (with J. Peace and O. Rose; Orbis, 2012).

Mobley’s primary interest is in uncovering in order to appreciate the meaning-making of  the stirring stories under the surface of the over-edited moralistic and priestly layers of the Bible, and he is currently writing a commentary on Judges for the Illuminations series.

Mobley’s teaching interests include Judges, the stories in the Bible and the Bible itself as a story, prophetic literature, Job, and reading the Bible in the light of contemporary sensibilities toward environmental sustainability. Mobley, an ordained American Baptist minister, also teaches Baptist Polity. At Andover Newton, Mobley was a co-founder of the CIRCLE interfaith program and he also teaches courses at YDS on interfaith learning.

Mobley has written articles and book review in journals such as the Journal of Biblical Literature, Catholic Biblical Quarterly, Interpretation, and Biblische Notizen, and has contributed to a number of Bible handbooks, including the New Oxford Annotated Bible.

Mobley has done archaeological fieldwork in Israel and served as an editorial assistant on the Dead Sea Scrolls project. He is an ordained American Baptist pastor.