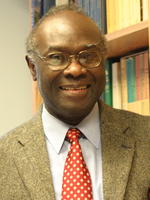 Born in The Gambia and descended from an ancient African royal family, Lamin Sanneh was a naturalized U.S. citizen who was educated on four continents. He earned degrees in history and Islamic studies and taught in several Universities, including the University of Ghana, Legon, the University of Aberdeen, Scotland, and at Harvard, before coming to Yale in 1989 as the D. Willis James Professor of World Christianity and of History. He was a life member of Clare Hall, Cambridge University, and an Honorary Research Professor at the School of Oriental & African Studies in the University of London. He was the recipient of honorary doctorates from the University of Edinburgh and Liverpool Hope University. He served several times as chair of Yale’s Council on African Studies. He was an editor-at-large of the ecumenical weekly The Christian Century and a contributing editor of the International Bulletin of Missionary Research, and he served on the editorial boards of several academic journals and encyclopedias. He served as consultant to the Pew Charitable Trusts; was an official consultant at the 1998 Lambeth Conference in London; and was founding member of the Council of 100 Leaders of the World Economic Forum. In 2004-05 he was the recipient of the John W. Kluge Chair in the Countries and Cultures of the South at the Library of Congress. For his academic work, Sanneh was made Commandeur de l’Ordre National du Lion, Senegal’s highest national honor. Sanneh was a fellow of Trumbull College at Yale. He was appointed by John Paul II to serve on the Pontifical Commission of the Historical Sciences at the Vatican and by Pope Benedict XVI to the Pontifical Commission on Religious Relations with Muslims. He was the author of over two hundred articles in scholarly journals and of more than a dozen books on Islam and Christianity. He was editor of the multi-volume Oxford Studies in World Christianity series. In 2011 he received the Marianist Award for his teaching and scholarship from the University of Dayton.

Whose Religion is Christianity? The Gospel Beyond the West, Grand Rapids: Wm. B. Eerdmans Publishing Company, 2003. Translated into German as Kontinentalverschiebung des Glaubens: Die Entdeckung des Christentums in Afrika, 2013.

Summoned from the Margin: Homecoming of an African, a memoir, Grand Rapids: Wm. B. Eerdmans Publishers, 2012.

“Gratitude and Ingratitude,” The Encyclopaedia of the Qur’an, vol. 2, Leiden and Boston: Brill Publishers, 2002.

“Secular Values in the Midst of Faith: A Critical Discourse on Dialogue and Difference,” in Theology and the Religions: A Dialogue, edited by Viggo Mortensen, Grand Rapids and Cambridge, UK: Wm. B. Eerdmans Publishing, 2003.

“Slavery and Islam,” Historically Speaking, The Bulletin of the Historical Society, vol. VIII, no. 6, July/August, 2007.

Foreword to Jesus and the Cross: Reflections of Christians from Islamic Contexts, Regnum Studies in Global Christianity, by David Emmanuel Singh, Wipf and Stock, 2008.

“’The World is My Parish’: Methodism and the Roots of World Christian Awakening,” Oxford Handbook of Methodist Studies, Oxford: Oxford University Press, 2009.

“Bible Translation as Intercultural, Historical Enterprise,” in David G. Burke, editor, Translation that Openeth the Window: Reflections on the History and Legacy of the King James Bible, Atlanta: Society of Biblical Literature, 2009.

“Bible, Translation, and Culture: From the KJV to the Christian Resurgence in Africa,” chapter in Andrea Sterk & Nina Caputo, editors, Faithful Narratives: The Challenge of Religion in History, Ithaca, NY: Cornell University Press, 2013.

“Truth and Divergence: A Response,” in A Trinitarian Theology of Religions: An Evangelical Proposal, Gerald R. Mcdermott and Harold A. Netland, New York and Oxford: Oxford University Press, 2014.

“Translations of the Bible and the Cultural Impulse:” The New Cambridge History of the Bible, vol. iv, From 1750 to the Present, Cambridge: Cambridge University Press, 2015.

Editor, The Oxford Handbook on African Christianity, under contract.