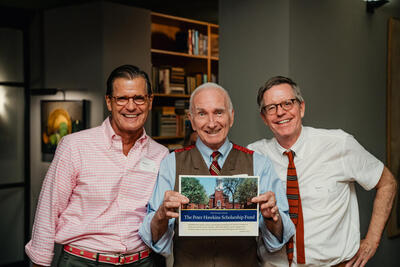 The scholarship is funded by a gift from Stephen Henderson ’87 M.A.R. and his husband, James LaForce, in recognition of Hawkins’ impact on the field of literature and religion and on Henderson’s own life and faith.

The gift was announced and toasted at an event for YDS alums and friends hosted by Henderson and LaForce on Sept. 22 in New York. A gallery of photographs from the event is available here.

Hawkins, Professor of Religion and Literature Emeritus, is a Dante scholar who spent 43 years in the classroom, primarily at YDS, before his retirement in 2019. Hawkins is credited with helping turn the study of literature and theology into an international academic discipline.

Henderson, a New York City resident, is a public relations professional and journalist and the author of the book The 24-Hour Soup Kitchen: Soul-Stirring Lessons in Gastrophilanthropy. James LaForce is a philanthropist and CEO of the PR firm LaForce.

“It is a cliche, of course, to say that something was a ‘life-changing experience,’ but attending YDS was exactly that,” Henderson said. “The professors I studied with expanded my mind, heart, and soul. I was able to shake off my fear of God, and perhaps for the first time, have a sense of God’s love and acceptance of me, just as I am.”

YDS Dean Greg Sterling called scholarship gift “a great example of the transformative influence of faculty on our students—and a onetime student’s generous response to that experience.”

The gift for the new scholarship is part of the Divinity School’s new “We Are Called” fundraising campaign, which seeks to build support for faculty scholarship and teaching; students’ academic and social justice pursuits; and the School’s trail-blazing living-building student residences, the Living Village.

Most parents would be proud to have a child attend Yale Divinity School, and to be given a scholarship, no less. My father was a conservative Baptist preacher, however, and deeply opposed to anything “liberal” or “progressive” when it came to theology. So worried was he, in fact, that when he saw my acceptance letter to Yale, he said, correction, he thundered, “I’d rather see you do battle with a lion that was infected with syphilis, than have you attend Yale Divinity School.”

Peter Hawkins to the rescue! Peter, as I hope you all know, founded the Literature and Religion program at Yale that I planned to attend in the mid-1980’s.

I was in my twenties at this time, still under the thumb of my parents’ expectations, and still pretending to believe in the God-fearing religion in which they’d raised me. Just at the point where I wasn’t sure I’d have the courage to create a family rupture over my decision to attend Y.D.S., my parents attended a “Lessons and Carols” service at Williams College, and heard a sermon preached by, you guessed it, Peter. He said to me afterwards, “if someone like Peter Hawkins teaches at Yale, you will be safe there.”

It is a cliche, of course, to say that something was a “life-changing experience,” but attending YDS was exactly that. For, just as my parents feared, the professors I studied with there expanded my mind, heart, and soul. I was able to shake off my fear of God, and perhaps for the first time, have a sense of God’s love and acceptance of me, just as I am.

I have Peter Hawkins to thank for this.