Dean Greg Sterling has issued an unprecedented acknowledgment of Yale Divinity School’s historical complicity in slavery and racism and has announced a series of actions to make YDS a more just and inclusive community.

“We ask God for forgiveness. We ask those against whom we have sinned for forgiveness,” Sterling said in a statement to the Divinity School community released in late December. “We do not ask for forgiveness without working to change our institution.” 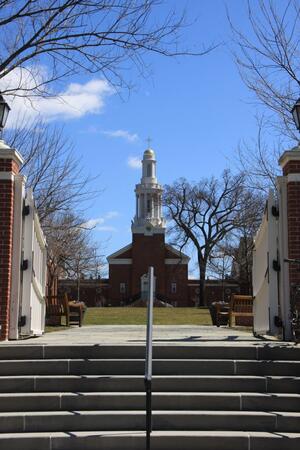 Among other actions, Sterling said the Divinity School is allocating $20 million in endowment to fund 10 social justice scholarships each year for incoming students who are dedicated to social justice work. The scholarships will cover all tuition for each recipient, as well as the comprehensive fee and board fee, and provide a $10,000 annual stipend to help meet living expenses.

Sterling’s statement was issued along with an announcement by Lynn Sullivan-Harmon, Associate Dean for Diversity, Equity, and Inclusion, on the School’s long-term strategy for achieving equity and belonging for all excluded groups. Their statements came in response to a series of recommendations presented earlier in the semester by an antiracism task force appointed by Sterling to rework the School’s 2015 diversity plan.

“We need to protect the wellbeing and psychological safety of all members of the community, especially those who identify as part of historically excluded groups,” Sullivan-Harmon said. She called such efforts “God’s work—ethical, moral, spiritual, and boundless.”

Sterling acknowledged that in Yale’s first century there were individuals associated with the college who enslaved people of African descent. He cited a recently uncovered receipt documenting the purchase of a three-year-old boy named Titus by Jonathan Edwards, a Yale alumnus who today is considered one of the pre-eminent pastors and theologians in American history. The receipt is part of the Shepard Family Collection—materials donated to the YDS Library by descendants of Timothy Dwight, Yale’s eighth president.

Sterling also noted early scholarships for Yale students—”Berkeley premiums,” as they were called—funded by profits from George Berkeley’s farm in Rhode Island, which was worked by enslaved people.

Although these acts predate the 1822 establishment of the divinity school as a distinct entity at Yale, YDS is hardly innocent, Sterling said.

“These 18th century acts are among the most egregious examples of ties to slavery by a major religious figure associated with Yale, but there is more that we must acknowledge,” Sterling said. “There’s a systemic marginalization of African-Americans during our history as an institution. The marginalization was felt by those who have been here, to say nothing about those who chose never to come. This haunts me most. We cannot rewrite history; nor can we ignore the legacy of the historical wrongs.” 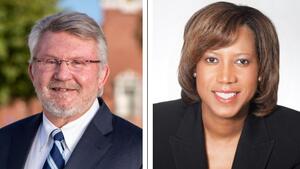 Sterling and Sullivan-Harmon laid out a series of actions the School is undertaking as part of a long-term commitment to inclusion and equity. In addition to the social justice scholarships, those actions—some of them already under way—include:

For more, view this one-page summary of the School’s new DEI plan.

These steps follow a series of other actions in recent years. For example, eight of the past 15 tenure-track faculty appointees at YDS are professors of color, and YDS has doubled students and staff members of color over the past decade while working to make curricula and instruction more inclusive. A timeline of the School’s antiracism efforts can be viewed here.

“We will not overcome the systemic and personal racism that white supremacy has spawned in our society with a new strategic plan, no matter how comprehensive the plan is or how fully we implement it,” Sterling said. “But we must start somewhere.”