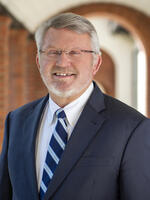 Sterling is the former Dean of the Graduate School of the University of Notre Dame, where he also served on the faculty for 23 years.

During his decade at YDS, Sterling has been a leading theological and moral voice for addressing inequality and injustice in society. Amid an urgent national reckoning with racism, he and the Divinity School have tripled the number of faculty from underrepresented groups and doubled the number of staff and students from diverse backgrounds. In addition, he has led efforts to put in place curricular and operational infrastructure to ensure an experience of inclusion and belonging for the entire YDS community.

Sterling has worked to provide increased support for students so that graduates can pursue careers and vocations based on their calling and not financial constraints. In 2022, the School achieved its goal to cover all tuition costs, and some living expenses, for students with demonstrated need.

Sterling has also led efforts to create the Living Village for student housing, a visionary project that is designed to be the education sector’s largest green-building residential complex and a model for the nation and the world. YDS has succeeded in earning the approval to move ahead with the first phase of this project, and a groundbreaking is tentatively planned for 2023, with the goal of moving students into the facility, at below-market rental rates, in 2024. The regenerative housing project follows efforts led by the Dean to upgrade the YDS Quad, and to renovate and restore the historic Common Room and Refectory in the northeast corner of the Divinity School campus.

In addition, Sterling was instrumental in creating the historic merger of Yale Divinity School and Andover Newton Theological School, which led to Andover Newton’s relocation to Yale and the continuation of its mission at YDS.

In his teaching and research, Sterling focuses on Hellenistic Judaism and has published over 100 scholarly papers on, among other subjects, Philo of Alexandria, Josephus, and Luke–Acts. He has focused on the ways Second Temple Jews and early Christians interacted with one another and with the Greco-Roman world. Sterling is the author of Historiography and Self-Definition: Josephus, Luke-Acts, and Apologetic Historiography and Armenian Paradigms and Coptic Paradigms: A Summary of Sahidic Coptic Morphology, and he is the editor or co-editor of five other books.

Sterling is the General Editor of Philo of Alexandria Commentary series published by E. J. Brill and Co-Editor of the Studia Philonica Annual.

Sterling received his bachelor’s degree in Christianity and History from Houston Baptist University in 1978 and completed post-baccalaureate studies in classics at Houston Baptist the following year. He received an M.A. in Religion from Pepperdine University in 1980 and an M.A. in Classics from University of California, Davis, in 1982. In 1990, he completed his doctoral studies in Biblical Studies with a specialization in the New Testament from the Graduate Theological Union in Berkeley.

Sterling joined the faculty at the University of Notre Dame in 1989 as a Visiting Assistant Professor and became a regular member of the faculty in 1990, earning promotion to Associate Professor in 1995 and to Professor of Theology in 2000. Sterling became Dean of the Graduate School at Notre Dame in 1997 and served in that role until coming to Yale in 2012.

He has held numerous leadership positions in the Society of Biblical Literature, the Studiorum Novi Testamenti Societas, and the Catholic Biblical Association. He is a minister in the Churches of Christ and serves in several leadership roles for his own denomination.

Gregory E. Sterling is president of the Christian Scholarship Foundation (CSF), a private, non-profit corporation designed to provide financial assistance to members of the Churches of Christ for scholarly activities of a religious character.