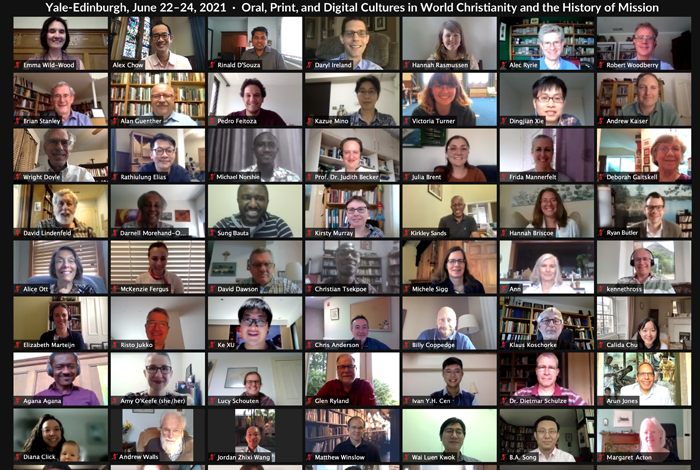 Yale-Edinburgh Group on World Christianity and the History of Mission

The Yale-Edinburgh Group is an informal group of scholars founded in 1992 by Andrew Walls of the University of Edinburgh and Lamin Sanneh of Yale University. The Group’s conferences and LISTSERV facilitate discussion and exchange of information about the development of world Christianity and historical aspects of mission, with special emphasis on the sources for documentation. The conferences are sponsored by the Centre for the Study of World Christianity at the University of Edinburgh and the Yale Divinity School.

The program for the June 28-30, 2022 conference is available at https://divinity-adhoc.library.yale.edu/Yale-Edinburgh/Y-E2022program.pdf.  Conference registration is now closed. For more information about the Yale-Edinburgh Group, contact:

World Christianity: Legacy and the State of the Field

The 2022 Yale-Edinburgh conference will offer a tribute to Andrew Walls and Lamin Sanneh, co-founders of the conference thirty years ago, as it engages with their legacy. This will be both retrospect and prospect. What have we learnt from Walls, Sanneh and their generation? In what ways has their legacy imposed limitations on the field, and in what ways do we need critically to consider new approaches to the study World Christianity? How have the approach, methods, and parameters of the study of World Christianity developed in recent years? For example, panels might consider the nature of translation as a predicate of the expansion of Christianity, as well as exploring new avenues of recent scholarship in World Christianity, such as the role of migration or theological evolution in mission, or the de-territorializing of Christian faith in the development of global Christianity.

In light of continuing uncertainty over the feasibility of international travel, the 2022 conference will be trialing a new format. Five hubs, in Yale, Edinburgh, Nairobi, São Paulo, and Singapore, have been involved in planning and presentation. The conference timetable will allow participants to attend panels in multiple locations online.